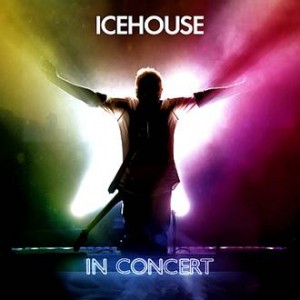 With a career spanning over 35 years it’s hard to believe that there are any “firsts” left to achieve for one of the country’s most loved and highly accomplished bands, but with the announcement today that icons of the Australian Music Industry, ICEHOUSE, will be releasing their very first Live album, ICEHOUSE: In Concert the band has proven once again that their reputation as mainstays of the country’s music scene is not about to change any time soon.

Produced by Iva Davies and ICEHOUSE bass player Steve Bull, ICEHOUSE: In Concert features tracks recorded during various performances from the band’s touring schedule from October 2014 through to February 2015. Iva, Steve and the band sorted through hours and hours of recordings to choose the very best versions of each track to compile the album. With no overdubs or studio trickery, the album is a genuine representation of what it sounds like to be live at an ICEHOUSE concert and features the line-up that has been touring since the band returned to performing in 2011.

ICEHOUSE: In Concert will be available as a 2-disc CD set in store and via iTunes from Friday 28 August 2015 with pre-orders are available for both at ICEHOUSE/InConcert. There are also plans to release a triple-vinyl set later in the year.

In celebration of this, yet another milestone in ICEHOUSE’s illustrious career, the band will again be heading out on the road taking the IN CONCERT experience to the fans visiting some well acquainted venues and debuting at some new venues along the way including as previously announced appearance at A DAY ON THE GREEN in Mudgee.

Iva Davies today said “I’m very excited by this release. We’ve been back playing live since 2011 and the In Concert recordings show the band at its strongest – it certainly sounds like us! Being our first true ‘Live’ album we’re all very happy to share this with fans and friends. While what people see on the IN CONCERT Tour may not be exactly the same as the album, we can promise everyone it will be just as powerful. The band can’t wait to hear everyone singing along.”

While the dates below don’t currently reflect a Concert in Adelaide, SA fans can rest assured ICEHOUSE is working on something special for them which will be announced in the next few weeks.

Tickets to all shows (excl. A DAY ON THE GREEN, West Australia and Queensland) go on sale at 9.00am AEST, Wednesday 12 August 2015.

ICEHOUSE: In Concert will be released through Universal Music Australia on Friday, 28 August, 2015 (AVAILABLE FOR PRE-SALE NOW)

More dates yet to be announced!