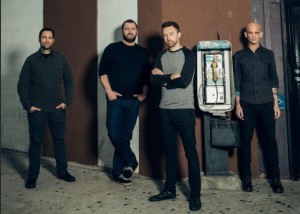 They’re one of punk’s most exciting, politically social bands, renowned for energetic live shows and dizzying, larger than life anthems. Frontier Touring is thrilled to welcome back acclaimed Chicago four-piece Rise Against, returning to Australia and New Zealand this December.

‘Another memorable show that none in attendance will soon forget.’ – Fasterlouder

‘Whether it’s a 500 or 50,000 capacity venue, Rise Against give it all when delivering their punk rock activism’ – Blunt Magazine

‘Rise Against are one band holding firm in the belief that it’s important for punk to stand for something real, and they’ve carried the torch for thoughtful, socially conscious punk rock for more than a decade’ – Consequence of Sound

Last on our shores in February/March as special guests of the Foo Fighters – joining Dave Grohl and co. on their Sonic Highways national stadium tour – the ‘I Don’t Wanna Be Here Anymore’ and ‘Tragedy + Time’ rockers return this summer to perform four very special headline shows, in Melbourne, Sydney, Brisbane and Auckland.

Comprised of Tim McIlrath, Zach Blair, Joe Principe and Brandon Barnes, Rise Against’s storied career has seen them cited as one of America’s most visceral live bands. From their 2001 debut The Unraveling to 2011’s Endgame and last year’s critically acclaimed The Black Market (out now through Universal Music), which debuted at #3 on ARIA Albums and Billboard 200 charts, Rise Against are truly one of a kind.

With over 200,000 albums sold in Australia alone, Rise Against are celebrating their tour announce with a brand new single, out today – ballad ‘People Live Here’ (listen here). Rise Against scored a triple j Feature Album with 2014’s The Black Market, their most successful album to date, while lead single ‘I Don’t Want to Be Here Anymore’ was voted by fans into the station’s 2014 Hottest 100 poll.

Rise Against’s history speaks for itself. With roaring energy and blistering power, Rise Against are not to be missed. Tickets will not be around for long – get in quick on Thursday 9 July to grab yours!

Rise Against
(All shows all ages)