BANDINTEXAS are hitting the road 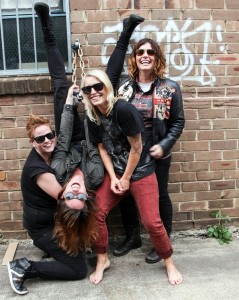 All girl indie punk rockers and one of our ‘Best Things You’ve Never Heard’ BANDINTEXAS (Aka The Texans) are hitting the road to celebrate the release of their first single for 2015 “The Scientist”. Still coming down from the high of supporting Aussie icons BABY ANIMALS & The Superjesus at a sold out Sydney Metro as part of the She Who Rocks Tour in June, BANDINTEXAS are setting off on a tour of their own.

“The Scientist” is the first new track since BANDINTEXAS’ 2014 debut release in “The ABCD-EP” which saw the ladies winning fans across the country and building a reputation for dynamic live performance.

The Scientist tour kicks off in Canberra on July 16th heading to Albury, Melbourne, Wollongong, Penrith and wraps up with The Texans supporting legendary Californian soul punks “The Bellrays” and Melbourne rock n roll powerhouse Dallas Frasca in Newcastle on Saturday August 8th and Sydney on Sunday August 9th.

“The Scientist” unfolds with punk rock force and is easily the band’s most thrilling track to date with a controversial film clip that will have even the most seasoned film guru’s hooked ‘til the very last second.

Check it out HERE

BANDINTEXAS refuse to be pigeonholed by genre. “In a single Texan serving you’ll be taken on a manic musical journey from the heights of melodic pop rock to the depths of dirty indie punk”.