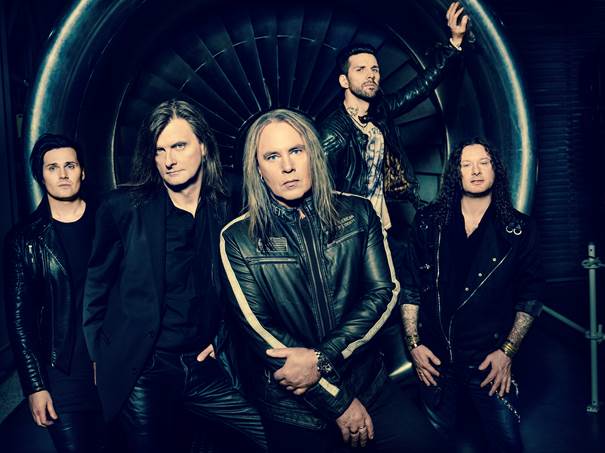 From release: When you think of Power Metal, one of the first bands that come to your mind is the German Legends HELLOWEEN! It’s not just a coincidence – they’ve played countless festivals all over the globe to a massive audience, and furthermore, they have taken their enthralling live performances as headline tours all over the world as well. With the 15 albums they have released so far, they have sold well over 8 million copies, and have achieved several Gold and Platinum awards. The band shows absolutely no signs of slowing down, and after over 100 sold out shows in support of their previous album, the band is on a mission to break their own records in support of their latest offering ‘My God-Given Right’. Three decades into their career, the band is on their absolute top form – creatively, as well as on the live show front. Hailed as one of the inventors of the power/speed metal genre, HELLOWEEN continue to break records and get better and better as the years continue. Not too many bands in the world can say that they’ve been getting better with age, but Helloween is a band than has mastered and continues to break ground in one of the most thrilling sub-genres of metal.

We chatted to Helloween bass player Markus about the band’s newest album ‘My God Given Right’ and its creation, a look back over their career, touring Australia, and much more…

The cover goes along with the title perfectly too…
Yeah, we wanted to have something very different from what we did before on the cover and I guess we got it.

Was there a set idea of how you wanted this album to sound or come together or did it essentially evolve into what it became?
I think the songs are telling you what they wanted to sound like and if Charlie works on it he does it always in the right way so there’s no worries about it, we come up with a couple of tracks and he can say guitar on here or this or that but in general Helloween sounds like Helloween sounds and you cannot go any other way you know, so it was clear from the beginning that it might be slightly different sound from record to record, but in general you have a very Helloween-y sound which is great.

I love the driving melodies and hooks all the way through it, was there an intentional somewhat throwback to this sound?
Well we always have a lot of melodies and a lot of harmonies, using choirs and using keyboards and twin guitars, it’s always been a big part of Helloween doing all this harmonic stuff, even when we started off doing speed metal and it was a lot of harmonies and you can always expect this listening to Helloween record, or expect in a Helloween record that’s not our yet, but it’s still there you know? We just love it we just take some harmonies to create a special sound and this is just the Helloween kind of style, you know?

What’s the biggest difference in the way you make new music now compared to earlier releases?
Well nowadays we’re all living around Spain, Germany, south of Germany, north of Germany, the middle of Germany, so we’re not hooking up once, twice or three times a week in the rehearsal room in Hamburg rehearsing songs or writing songs, that would be very complicated now with flying and using trains and all that. It’s like after a long tour we go home and write our songs very individual, each member and silence where you can be in your own environment rather than being in some place hanging out of home for another half of a year or something. This seems to be working for us very, very well, everybody is at home in their own private little corners writing songs and once you think you have enough you can all get together and see what songs are there, it’s just working for us, it’s just the best way to do it.

So you still get together to record?
Well in the studio we start with the drums, they put on the guitars and I actually don’t need to be there when they do the solo and rhythm stuff, I can when the rhythm guitars and drums are done and I put my bass to it. Then I kind of stay there for a couple of days having some fun, having some good times and then I go back home, I don’t need to sit there mixing for two weeks or watching guitars for weeks, it’s very, very different. I go home and have some time off and do some promotional activities or whatever, they don’t want me to be there when they’re doing their guitars, it’s rather disturbing than helping *laughs* when I’m bored it’s beer talk and bull crap and that’s definitely what they don’t want before the guitars or vocals *laughs*.

Looking back to 1985 with ‘Walls of Jericho’ in starting out, did you guys have any idea of the longevity your band was about to embark on?
Well we were hoping that it’s all going to be a long, long journey and we were actually trying to create some music that lasts longer than ten years or a couple of years and then going back to work because the band is not working anymore. It could’ve easily done some normal hard rock which was popular at the time, but that wouldn’t really be our thing, we thought about something extreme, that’s why we worked on those twin guitars, on the fast songs and with that melody still coming in because we love that as well. We were actually trying to create something that’s kind of everlasting or something and as you can see it’s working…

Looking back over the thirty years you’ve been in this band, what would you sight as the biggest point of evolution that has taken place thus far?
Well, well, I guess there’s a lot of points in a career like this, for example the very first record was very, very emotional for all of us with a record contract and doing the ‘Keeper 1’ that brought us to America for the first time, big European and American and Asian tours we did, getting all the gold record and platinum records and all that stuff, that was kind of we’ve been eaten by you know? Then was a turning point, there was another member problem  and all that, then Andy come into the band doing ‘Master Of The Rings’ showing people we can do it again after they thought Helloween was dead. Then bringing out an album like ‘Master Of The Rings’ was kind of a big evolution for us, just like coming back with a big boom, I kind of like that you know, those are moments that you will never forget and that is all the evolution of Helloween just goes on in a way.

So there’s no chance of slowing down at the moment?
Hmm… well we slow down on tours because all we do is festival shows this year, but then we do a lot of festivals, takes us busy from now until September / October, then we’re giving it a break and doing the actual Helloween tour in the next year. So doing the tour of Helloween of our own and then sliding back into the festivals again, it’s a little air in between those festival shows, you’ll have a couple of days at home during the week and when everybody is out having fun at the festivals, we go there and work. I mean it’s my life it’s not really work, but go there to entertain…

Being to Australia before, what are some of your best memories of playing in Australia?
Very, very, very hot, I had some of the hottest shows I ever did, you know? *laughs* I’m not used to that heat. But you’ve got nice beer, nice food, very nice people, I kind of liked it a lot, it was just a week or ten days and this is what it will be the next time as well. I kind of like playing the chance of playing at the same bars where maybe AC/DC, Rose Tattoo and people like that started off, Jimmy Barnes and all those people, maybe there was a club which they were playing in when they were starting their career, and I find it very romantic seeing it and playing there.

In the thirty years, what stands out above all the rest as the biggest highlight of your career thus far?
I don’t know, when we played Castle Donington, that was one highlight that was great to play with Iron Maiden on a festival like this was definitely a highlight, I would say Rock in Rio was a highlight, but still it’s not always only the big shows, there’s still highlights on shows that are very small and just emotional with people singing along the whole time and it’s just great you know? It’s that very moment you’re on stage and looking people in the eye and shaking their hands, that’s it in that very second it happens.

Other side of that question, is there something that you still want to do with this band that you haven’t yet had the opportunity to?
Well making a movie maybe *laughs* I’d like to be a dead man in a movie with the band, I don’t know *laughs* we could headline some festivals, I would like to do that someday.

What do you still enjoy about being a part of Helloween?
It’s the respect that people are giving us nowadays being there for thirty years, there’s a lot of bands being there for twenty, twenty five, thirty years but they had a break in between for like fifteen years and then reunion themselves, but Helloween was just there for thirty years constantly doing touring, doing all those records and we got a lot of respect from people wherever we go and I kind of like that you know? That was what we were working on and hoping to get because I respect people being around for a long time always doing shows, always doing tours and records constantly, I like that a lot. You’ve also got to go through hard times, when there was different music going on like the beginning to the end of the nineties, it was a rough time, different styles of music and whatever they called that new style of music, suddenly heavy metal and long hair was like embarrassing for a lot of people, and we still go out and play, you’re not going to stop and come back when it got cool again, you’ve got to go through all those up and downs.

Lastly, let’s look ahead to the future, so finish this sentence for me, by the end of 2015, Helloween will…
Will do another tour, another show, another festival show and maybe even start writing new songs… I don’t know, but maybe who knows *laughs*

TICKETS ON SALE 9.00am Monday 1st June from HERE: