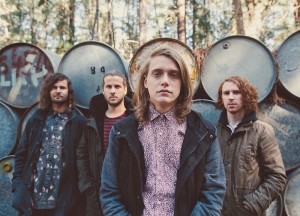 The ‘dark horse’ springs from nowhere, claiming unexpected, sometimes shocking success. Having weathered a two year break up, member departures, various personal obstacles and almost five years without a recorded release, it’s easy to consider THE GETAWAY PLAN as such. Their anticipated third LP Dark Horses will be revealed on July 3.

Working with longtime friend of the band Samuel K on production duties, this is The Getaway Plan’s first album conceived, written and recorded completely in Australia. Funded through the generosity of the band’s famously dedicated fan base, Dark Horses sees the band refine their sound, drawing together lessons learned on 2008’s wildly successful Other Voices, Other Rooms and 2011’s Requiem . The writing process for this record was open, the band members collaborating with a newfound vigour. Strange, that after ten years in the saddle this band is finally beginning to find their feet. Sample their efforts via introductory track ‘Landscapes’.
LISTEN TO ‘LANDSCAPES’ HERE
The Getaway Plan have engendered their ‘Dark Horses’ with optimistic spirit of focus, determination and dedication from which it sprang. Catch The Getaway Plan on the road this year as they introduce it to the world with all the passion with which their name has always been synonymous.

THE GETAWAY PLAN ON TOUR