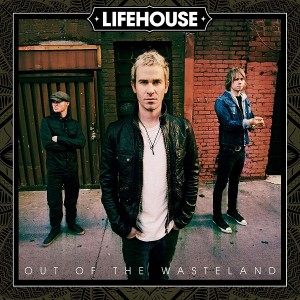 “Tracks like ‘Hurricane’ show Lifehouse at their most engaging, paving the way for Out of the Wasteland to be remembered as their biggest and best yet.” – Artist Direct

“…it’s refreshing to see a band ignore everything else and simply be the best them that they can be, putting their true fans, the ones that have stuck with them for over a decade, first.” – BlackBook

Multi-platinum alt-rock band Lifehouse will release their much-anticipated NEW studio album, Out of the Wasteland worldwide digitally on 26th May and physically in Australia on 19th June via Kobalt Label Services. It is now available for pre-order on iTunes. iTunes will also feature two exclusive bonus tracks and fans who pre-order the album will receive instant downloads of “Hurricane,” “Flight” and “Wish,” PRESS HERE.

Lifehouse premiered a new track “Wish” off their upcoming album on PopCrush, PRESS HERE for a first listen.

Billboard.com gave fans a first taste of the upcoming album with lead single “Hurricane,” PRESS HERE to listen. Out of the Wasteland captures the sound of a band going through a rebirth and finding the freedom that comes after a period of transition and regeneration. Whether it is the tender track “Central Park,” “Wish” or songs like “Yesterday’s Son” and “Hurt This Way” that feel to be a continuation from their last album, Out of the Wasteland reflects the range that Lifehouse is capable of today. Also on several songs, including the harmony-heavy track “Hourglass,” Wade got to fulfill a musical fantasy and work with legendary moviescore composer James Newton Howard to create more expansive string arrangements.

Out of the Wasteland is the work of a group that has some history. Los Angeles-based Lifehouse broke through in a big way when “Hanging by a Moment,” from their debut album No Name Face, spent 20 weeks in the Top Ten and won a Billboard Music Award for “Hot 100 Single of the Year.” Since then, the band has released five more albums, sold over 15 million records worldwide and spun off such hit singles as “You and Me,” “First Time,” and “Whatever it Takes.” Lifehouse is one of the most played artists in the history of Hot AC with 1.5 million spins and over 1.4 Billion Pandora Plays to date.