10 years ago an unknown band from Perth, Western Australia pooled their very limited resources and questionable facial hair, and got to work on their debut album. Recorded in various spaces, in various ways, with a slightly varying line-up, they borrowed gear, they borrowed money, they borrowed space and they used some tunings that perhaps haven’t been heard again. The band were KARNIVOOL and the album that had so much blood, sweat, tears (and god knows what else) expended on it in those early hours was THEMATA.

A decade later and Karnivool are an international force to be reckoned with. They tour most of the continents, most of the time, playing to a rabid worldwide audience that follows and debates their every move. Just this week they are in Europe headlining sold out shows in iconic venues like The Melkweg in Amsterdam, the Trabendo in Paris and The Roundhouse in London. Their headline sets are quite long, in part due to the fact that there are quite a few songs from that first album that people insist they play. Somewhere on earth, possibly right now, they are finishing a set with “Themata” and people are about to go ape-shit when that riff kicks in….

Karnivool are a band that usually only ever look forward. But, for once, they are going to take a look over their shoulders. The Themata Decade Tour: where longtime fans can go nuts to old faves, and new fans can hear some nuggets that don’t get shined often enough.

Tickets on sale now from KARNIVOOL.COM.AU 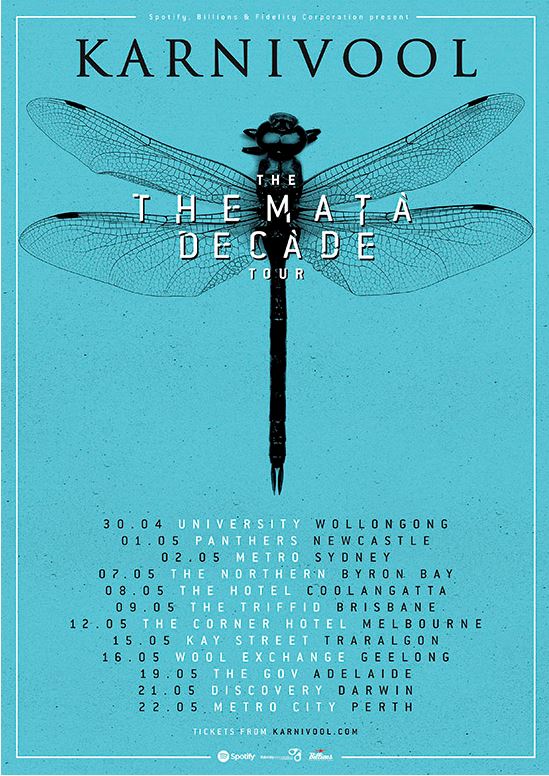