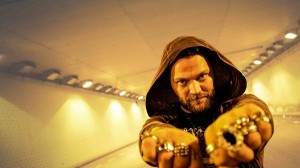 After a string of sold-out shows on their last visit down under in 2013, Professional Skateboarder and star of Jackass, Bam Margera, has just announced that F*ckface Unstoppable will return to Australia for another national run comprising of capital city and regional dates.

Being described as “a band that leaves you speechless“ – (Must See This Live Blog), and “A fun unpredictable night, which was awesome for all” – (SF Media), F*ckface Unstoppable put on a live show second to none, which is as proficient musicianship wise, as it is with its highly outrageous and entertaining antics.

The 2013 tour exceeded everyone’s expectations with all the drama, debauchery, chaos, stunts, and nudity one could possibly pack into a live gig.

Whilst all this mayhem is taking place, Bam and his band (made up of members from CKY, Viking Skull and Guttermouth) still manage to keep it together and deliver a show that is a reminder that rock ‘n’ roll isn’t dead, and is in fact, very much alive.

Launching his acting career through cult reality TV-series Jackass, over the years Bam has also being at the forefront of many other successful ventures including MTV’s Viva La Bam, Bam’s Unholy Unionand all three Jackass Movies.

F*ckface Unstoppable is yet just another reminder that Bam Margera is one of the world’s greatest entertainers who will always deliver his best and make sure his fans get what they expect and more.

Catch Bam Margera As F*ckface Unstoppable and all the mayhem on the below dates and venues.