Schuylar Croom of He Is Legend 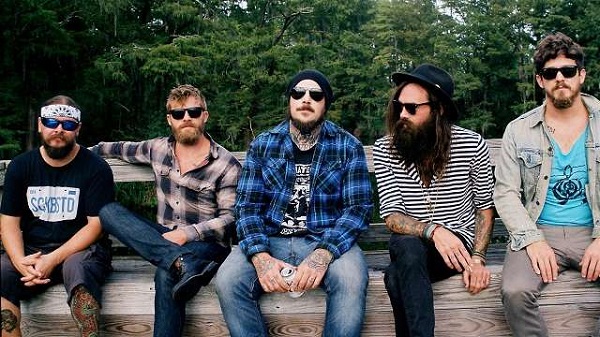 “…as far as He Is Legend as a core it’s pretty much the same. It feels the same, we’re pretty much in the same situations, we have a lot of new life and new excitement for what we’re doing, but we’re just brothers you know, we love each other and we hate each other *laughs* I wouldn’t have it any other way.”

From Bio: Impulsive is a word that comes to mind when thinking about Wilmington, NC band HE IS LEGEND. Their sound is best described as rock and roll although; it can be difficult to predict what direction their next album might take. Refusing to be pigeon holed into one sub-genre, they choose to write songs that can be unique and polar opposites of each other, but still assuring you that you’re listening to HE IS LEGEND. Pulling influences from bands like Nirvana and Smashing Pumpkins, they crafted an aggressive and faster sound with those defining elements.

In Wilmington North Carolina, we chatted to front man of He Is Legend, Schuylar about the band’s return not only to Australia for Soundwave but also their return to the world of making music…

You’re headed to Australia to play the massive Soundwave Festival, how pumped are you to be part of this bill?
We are pretty pumped my man… pretty, pretty pumped. The lineup alone, I’m just stoked to be able to go and see so many amazing bands.

Is there anyone you’re stoked to be sharing the tour with?
I mean Faith No More, because that’s like my childhood, and that’s one of the coolest things ever to be able to catch that show and see many of them.

The last time you toured here back in 2007 Soundwave had its first national year, have you heard anything about the festival itself from anyone who’s played it before?
Well I’m just excited to play anywhere, we’re pretty grateful for any chance we get, just being that far away from home and meeting people that you were never supposed to meet and rockin’ out, I think it’s just an honour, it’s very cool. It’s kind of surreal that we’re coming back. I don’t even know which bands are playing the day we’re playing, I don’t know what sidewave shows we’re doing but we’re down to ball out man. It’s gonna be dope though, I’m pretty sure Trash Talk did it last year and I followed them vicariously through their Instagram or whatnot, but it’s cool to see such a cool festival and be able to go and be part of something like that, I mean Australia is one of the most beautiful countries I’ve ever been to, man, so , so, so pretty.

You’ve been to Australia before, back in 2007, do you have a great memory of that tour that you can share with us?
Yeah, I do, I remember the last day, we might have had a few drinks or whatnot, so it’s a bit foggy, but the last day we were there we were in Perth and we went to the ocean and I’m on the Atlantic ocean and there on the other side and easting oysters over there was so surreal, I grew up eating from the ocean, so it was nice to see the beach there and touch sand on the other side of the world and look up at the sky and all the hippy shit, it was great.

Your newest album ‘Heavy Fruit’ was released last year, your first in five years after a five year hiatus, why was now the right time to get the band back together?
Well we had talked about writing and whatnot, me and Matt, Adam and Steve had jammed or whatever but Steve had gone on to do other things and went to school or whatever and we didn’t really have the full component of the band and it wasn’t until we found Sam that it felt right to get back on stage. Then the other parts of the band started to fall in place so it just made sense that we continue and play shows, write music, and then finding DENNY now too is like it added even more life to the band, so it’s just timing and whatnot. We were younger and had been doing it for pretty much ten years nonstop…

How if in any way had the dynamic changed between the band now compared to where it was left in 2009?
I mean the dynamic definitely changes when you add new members, but as far as He Is Legend as a core it’s pretty much the same. It feels the same, we’re pretty much in the same situations, we have a lot of new life and new excitement for what we’re doing, but we’re just brothers you know, we love each other and we hate each other *laughs* I wouldn’t have it any other way.

What was it like coming together again to create new music?
It was great, I think we all needed some sort of aesthetic outburst and it was just like when you’re a creative type and you don’t create well we were all doing our own thing but He Is Legend as an entity has a force and I feel like it’s Papa John buying his old Mustang, buying the car that you drove when you were sixteen and getting back in it and smelling it and having all those memories come back, it’s amazing.

What would be the best way to describe your live show to someone that hasn’t seen you before?
Funky maybe, like sexy, I think. It’s fun and it’s rock and roll.

What’s next for He Is Legend?
You’ve kind of got to balance the touring with writing and the home time, but we’re hoping to be on tour as much as we can man, we’ve got plans to write and we’ve all been working on some stuff, but we’d like to be putting out another record and that’s kind of the idea, but also come from Australia to do some touring for South by South West and then our hopes are maybe to be in Europe for all the summer festivals in Europe, then some recording in there, so that kind of caps off a pretty good year.

So it’s fair to say that He Is Legend is back now and ready to keep going?
Oh yeah, man, definitely, definitely, we never felt better it’s great.

Lastly, let’s predict the future, so finish this sentence for me, by the end of 2015, He Is Legend will…
Have another album?

You say that as a question *laughs*
Well I didn’t want to say have another album out because what if it takes us that long to do it and it comes out in 2016, by the end of 2015 it would be nice to have another album, whether it’s released or not, who knows? That comes with red tape and that’s sticky…

Catch He Is Legend as part of Soundwave 2015 at the following dates: