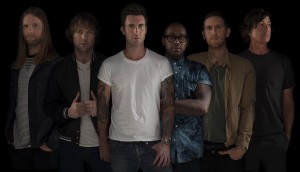 Tickets for both shows will go on sale at 2pm on Monday February 23.

Telstra Thanks is bringing an exciting 48-hour pre-sale just for Telstra customers from midday Wednesday February 18 until midday Friday February 20. For more information and to register, visit: telstra.com/music

My Live Nation members can also be among the first to secure tickets during the pre-sale beginning at 2pm next Friday, February 20. For complete tour and ticketing details, visit:livenation.com.au

Capturing their first of three Grammy Awards as “Best New Artist” of 2005 and going on to sell more than 23 million albums and 109 million singles worldwide, Maroon 5’s releases have gone Gold and Platinum in more than 35 countries.

In Australia, the band has sold nearly one million albums and more than 2.3 million singles, seven of those singles hitting the ARIA Top 10 including massive #1s ‘Payphone’, ‘One More Night’ (both five-times Platinum) and ‘Moves Like Jagger’ (eleven-times Platinum).

The band won over fans and critics alike with the hybrid rock/R&B sound they introduced on their ARIA #1, five-times Platinum debut album, Songs About Jane and their platinum album,It Won’t Be Soon Before Long, which included hits ‘Makes Me Wonder’ and ‘If I Never See your Face Again’.

In 2010, the band released their third studio album, Hands All Over, which featured the group’s anthemic chart-topping smash single ‘Moves Like Jagger’. The song has since gone on to become one of the best-selling singles of all time in the US.

Maroon 5’s fourth album, Overexposed, hit the ARIA Top 5 and reinforced the group’s status as a US powerhouse in popular music with all of its singles rising to the top of the US charts and setting an all time record for the most #1s (six in total) by a group in the US Top 40 chart’s 20-year history. In conjunction with the album, Maroon 5 wrapped one of the highest grossing tours of 2013 with more than 50 million dollars in ticket sales.

Their latest album, V, debuted at #4 on the ARIA Chart and #1 in the US, featuring hits ‘Maps’, US #1 ‘Animals’ and latest single ‘Sugar’ is rising up the chart.

Special guest on all shows is Swedish trio, DIRTY LOOPS. Formed in 2008 while attending the Royal College of Music in Stockholm, the band’s big break came when their version of Lady Gaga’s ‘Just Dance’ became an overnight viral sensation. They followed it up with creative covers of pop songs by Justin Bieber, Adele, Rihanna, Britney Spears and Justin Timberlake. The band released their debut album Loopified on Universal Records in 2014, which boasts ten original tracks including standout single ‘Hit Me’.

After touring extensively around the world, this will mark the band’s first ever trip to Australia. With noted fans from Avicii to Stevie Wonder, the band’s infectious energy and pop fusion live show is not to be missed.