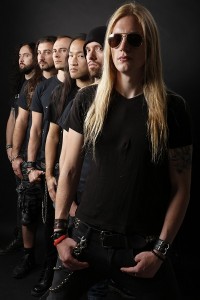 Multi-national metal maestro’s DRAGONFORCE have announced the worldwide release of their debut DVD, In The Line Of Fire out July 10 through 3wise Records. The release will be a double disc package of the DVD, an accompanying Live Audio CD of the show and will also be available in Blu-Ray.

Shot in High Definition during the bands Ultimate Stage headline show at 2014’s Loud Park Festival in the Saitama Super Arena, Tokyo, the band used nine camera angles to capture the raw energy of their show and instrumental dexterity for which they are rightly celebrated worldwide.

The track listing below features a mixture of new songs from the latest album Maximum Overload mixed in with foot stomping anthems and lightning fast shred-fests from previous releases.

Fury of the Storm

Symphony of the Night

Through the Fire and the Flames

Valley of the Damned

DRAGONFORCE are currently on the Maximum Overload World Tour, which commenced in September 2014 and is due to conclude in 2016.

Throughout their six studio album and multiple world tour history DF have steadfastly refused to shoot a DVD, until now. Guitarist Herman Li explains,  “We always held the opinion that if we ever did a DVD we wanted to do it properly. Now, having released six studio albums we thought we had a great cross section of material to pick from and we knew the facilities at Loud Park made it a great place to film a show. Everything just came together and we’re very pleased with the results and hope the fans will be also”.

DRAGONFORCE have just released the brand new video for Three Hammers, which you can check out HERE, It’s a snapshot of the DVD shot at the same show.