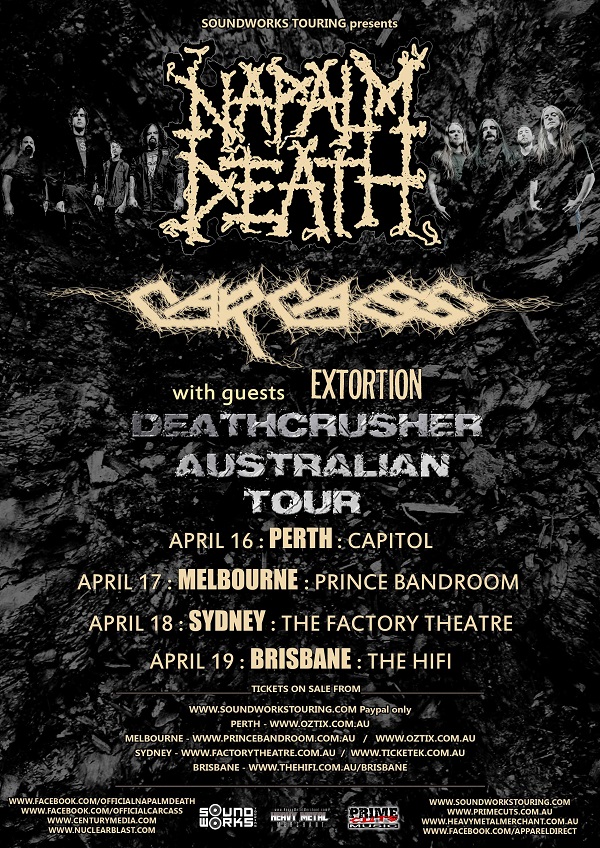 Australian metal fans, can a metal package simply get any better than this? Without question in this day and age, this tour is truly a worldwide once in a lifetime opportunity, and you are fortunate enough to be getting it right here! Two of the most influential and legendary acts in the history of the grindcore and death metal genres, NAPALM DEATH and CARCASS, join forces in a pairing that has not been seen for decades, to create the ultimate death metal fans dream package in DEATHCRUSHER. Heads will roll, limbs will fly and bodies will rot in this most spectacular and rare offering.

NAPALM DEATH – 34 years of grindcore ultra-violence, 34 years of being one of the hardest working, hardest touring bands on this miserable planet, NAPALM DEATH’s conviction, energy and belief in spontaneous, outspoken yet extreme music is far from being watered down. Fifteen albums in, NAPALM DEATH’s concerns are realised through intense, thought provoking and devastatingly brutal songs. Once again with the bands new album “Apex Predator – Easy Meat” the band venture into neckbreaking mid-tempo passages to allow the listener to take a breath before vicious blast beats hammer you out of existence. It has been five long painful years since the band left a blazing trail of destruction around this country, NAPALM DEATH are set to create havoc upon us all again with the same unrelenting carnage.

Along with NAPALAM DEATH, CARCASS are the undeniable legends and forefathers of grindcore. Close to 30 years of developing and crafting their sound to what it is today, CARCASS last year released ‘Surgical Steel’, an album many critics regarded as the best metal album of 2014 and rightly so. Everything a CARCASS fan could want is on this record, with every era of the band represented. Although having just been to Australian last year, the band could not wait to bring their clinical like skills back to Australia and dissect their way around the country again with their technical precision.

Rounding out this incredible package are Australian cult noise crushers EXTORTION, who will undoubtedly challenge your ear drums with each blasting song of fury.

ALL SHOWS – www.soundworkstouring.com  – paypal only