HALESTORM ventures ‘Into The Wild Life’ 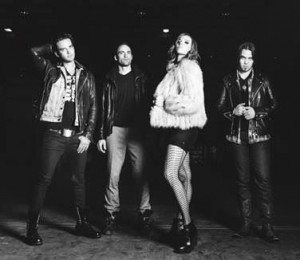 Halestorm has announced details of their massively anticipated new album. Into The Wild Life will be released on April 3, 2015.

Into The Wild Life marks the GRAMMY® Award-winning hard rock band’s long awaited third studio album and follow-up to 2012’s The Strange Case Of… Recorded last year in Nashville with GRAMMY®-nominated producer Jay Joyce (Cage The Elephant, Eric Church) at the helm, the album is heralded by the scintillating new single, Apocalyptic.

Into The Wild Life is not a departure,” says Halestorm front woman Lzzy Hale. “It’s an invitation to all things Halestorm. Lyrically and musically, we explored everything that makes us tick. We set a new standard for this record and gave ourselves no choice other than to be unapologetically ourselves in every way. Peel away at the onion that is our third record if you dare and let us drag you deeper into our world.”

Released in 2012, “The Strange Case Of…” debuted at #1 on Billboard’s “Hard Rock Albums” chart while also making a top 15 entry onto the overall SoundScan/Billboard 200. The album’s success was fuelled in large part by the

Love Bites (So Do I) and the single went on to earn the band their first-ever GRAMMY for “Best Hard Rock/Metal Performance” at 2013’s 55th annual event.