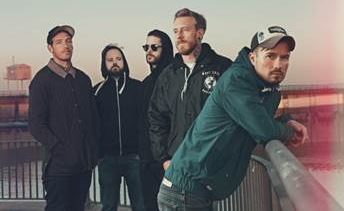 NEW ALBUM CHAPTER AND VERSE SET FOR RELEASE ON JANUARY 23, 2015

“A shot of adrenaline.” – DIY Magazine

“Funeral are still fearlessly doing what they want… and they still sound like no-one else.” – Kerrang!

Welsh rock band Funeral For A Friend‘s seventh studio album Chapter and Verse will be released next week and they’ve released a new music video for single Pencil Pusher in the lead up. It’s a track that’s exemplary of Chapter and Verse in its driven rawness. The album itself can also be previewed with clips of each and every track streaming here.

Recorded in two weeks with Lewis Johns (Gnarwolves, Goodtime Boys), Chapter and Verse is a classic Funeral For A Friend effort in the spectacular way it melds gruff attitude with melodic choruses, but it also happens to be one of the most sonically diverse records the band has ever made. It is a raw and energetic effort that propels the band to a whole new level, whilst simultaneously raising the bar for everyone else.

12 years on from their impressive debut, Casually Dressed & Deep In Conversation the band has become an ever-present force through regular releases and relentless touring. April sees the band embark on their 7th trip to Australia to perform songs from the new album plus favourites from their remarkable career. Anyone that has witnessed Funeral For A Friend live can attest the band leaves nothing on the stage.

TICKETS ON SALE 9AM THURSDAY 15 JANUARY