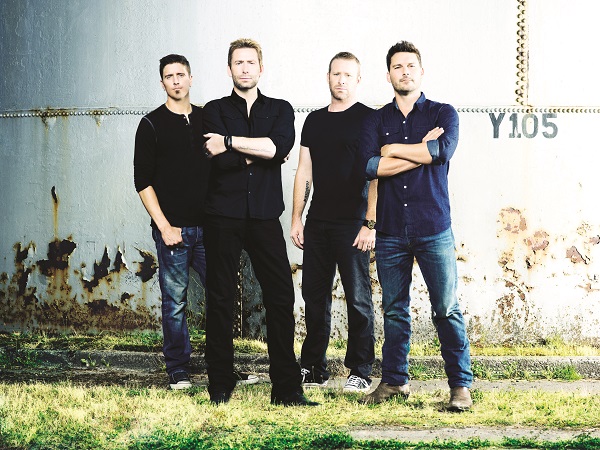 Billboard‘s ‘Rock Group of the Decade’, NICKELBACK are powering up to kick off a massive May 2015 Australian tour in support of their eighth full-length studio album, No Fixed Address, unleashed today.

The decibels will rise as Nickelback fire up their trademark unmistakably huge sound, lifting the roof with anthems ‘Someday’, ‘Gotta Be Somebody’, ‘When We Stand Together’, ‘Burn It to the Ground’ and the classic ‘Figured You Out’ – plus new tracks ‘What Are You Waiting For?’ and ‘Edge of A Revolution’ – ringing out alongside all-time-classic power ballads such as: ‘Far Away’, ‘Lullaby’, ‘Trying Not to Love You’ plus ‘Photograph’, ‘Savin’ Me’ and ‘How You Remind Me’ from the historic All the Right Reasons (the album spent an incredible 112 consecutive weeks in Billboard’s Top 200 selling more than eleven million copies worldwide).

Last week the band announced a 61-date arena tour of North America, adding to the eight million tickets already sold across 12 world tours including sold out shows in Australia during their previous 2012 tour.

“We can’t wait to tour Australia.  Aside from being one of the most beautiful places on Earth and having such a vibrant, storied and rich musical heritage; simply put, it’s the people that make it so special for us.  Australians have an insatiable musical appetite and are among the best fans in the world.  I’ve played some of my favorite shows there and always look forward to making it back.”
– Mike Kroeger
Tickets will go on sale at 10am Friday November 21.

My Live Nation members can be amongst the first to secure tickets during the pre-sale beginning at 2pm this Tuesday, November 18. For complete tour and ticketing details, visit:www.livenation.com.au

Inescapable and irresistible, Nickelback have cemented themselves as one of the most enduring and commercially successful acts of the past two decades. The band’s worldwide album sales exceed 50 million, solidifying their status as the second best-selling foreign act of the 21st century in the U.S., behind only The Beatles.

Nickelback’s Australian sales have hit 14-times-platinum and their previous studio release,Here and Now debuted at #1 on the ARIA chart, their fifth consecutive album to hit the Top 5 with singles ‘When We Stand Together’ and ‘Lullaby’ going platinum and gold respectively.

No Fixed Address (through Universal Music Australia) lands in stores today, featuring the singles ‘What Are You Waiting For?’ and ‘Edge of a Revolution’.

TICKETS ON SALE
10AM FRIDAY NOVEMBER 21