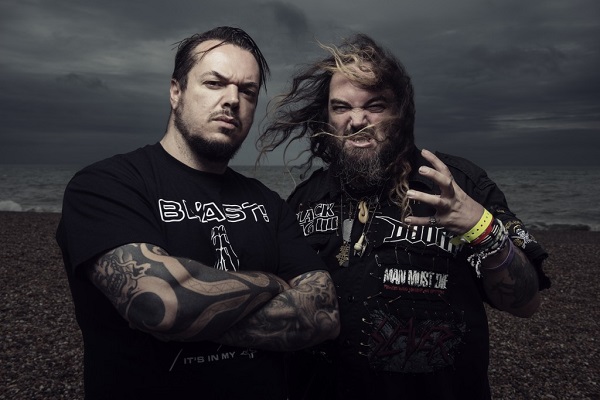 “I have to say that I really had a good time you know like me and Max really push each other to do certain things and to play certain ways and this album was no different, it was really about that, about pushing each other and trying to do something that at the same time that was fun as I believe that’s very important.”

From Bio: The Cavalera brothers Max and Iggor delude nobody when it comes to determination and stubbornness. In the 1990s the Brazilians brought up some of the most uncompromising Metal records of music history with SEPULTURA and show with CAVALERA CONSPIRACY that fatigue is a foreign word for them. Their latest record Pandemonium is no exception: Frontman Max Cavalera rushes with bellow of rage into the fray, lets his brother drum coarsest grooves and puts his finger into the open wound. Does anyone want to know how timeless Death / Thrash Metal sounds? There are a dozen prime examples on Pandemonium!

At home in London, we chatted to Iggor Cavalera about the band’s new album, touring and during the skype dropouts we learnt some new swear words…

Thanks for your time Iggor, so to start off can you tell us about the title of the album ‘Pandemonium’ and what it represents to you personally?
When me and Max were writing the album at the time in the studio, that was one of the titles that Max had for one of the tracks, and I was like man, this is amazing, as for us it really represents especially for us how things read and change from the past until now, how humanity is still all fucked up, So that’s basically the whole concept behind it, how much things are still fucked up and it doesn’t seem like it’s going to change at all.

I always like to do this before albums are released, so can you give me one word that you feel sums up ‘Pandemonium’ as an album?
I would say ‘Brutal’ is one word that I really think fits the whole concept.

As a band did you have an idea of how you wanted this album to come together when creating it or did it naturally evolve as you were making it?
It did. I have to say with each Cavalera record we really didn’t have a master plan or even a master talk about how things should be and really it  reflects when were in the studio. At that time it’s a big reflection of that rather than a big plan or how we’re gonna go where we’re gonna go with the record or how the songs are going to sound like, there’s not much planning, it’s really on the spot.

So it just turned out THIS heavy?
Yeah, it was just almost by accident we had a few demos that me and Max were trying out and we tried the first one and it was a fast one and then we did the second and third which was just as heavy and we just looked at each other and went back to all the demos and just tried to compile them into the album and that’s how it came out.

What about in terms of your playing, this album is fucking fast man, how did you go in the studio this time around?
It was fun, I have to say that I really had a good time you know like me and Max really push each other to do certain things and to play certain ways and this album was no different, it was really about that, about pushing each other and trying to do something that at the same time that was fun as I believe that’s very important.

A song like ‘Insurrection’ man, I got tired just listening to it so kudos on some bitchin drumming, how was that one for you?
That was good because it felt natural, I wasn’t struggling or anything like that, it felt really, really natural to go in that direction, to go as fast as it came out and to do the beats like that so I felt really good and I remember going back from the studio every night and thinking that it felt so natural.

You were here a couple of years ago for the Big Day Out, when do you think we’ll see you back in Australia?
We’re talking about doing touring for the new record in Australia so hopefully if we can squeeze this in between all the other stuff we want to do I think this is going to be amazing because I remember the last time we did Big Day Out and a few gigs, it was so much fun. I remember being there and some of the gigs being very special and some of the shows with great energy with the crowd.

Being here a few times, what’s your favourite thing about Australia?
I just have a lot of old friends in Australia and of course I enjoy the country itself, it has such a strong nature and things and it makes you feel at home. It’s definitely a lot of fun to come back every time, the only thing that’s a bit crazy is the flights sometimes can get annoying, especially when we’re coming from Brazil, I think that’s the only negative thing about it. I wish it was closer.

What is it about being in Cavalera Conspiracy that you enjoy the most?
I think the two things I enjoy the most is of course being around Max and the company we have together like with each other, but also the fact that it’s a band that represents us now rather than representing us in the past. It’s something for the future, we write new music, so it’s very special for me.

What’s your favourite thing to do outside of being in this band?
Nowadays I really enjoy being with my family, doing things like taking my kids skateboarding or going to the beach or things like that and just do that as much as possible.

Lastly, let’s predict the future, so finish this sentence, in 2015, Cavalera Conspiracy will…
Be touring like crazy… I can only see that right now… the plan is really to concentrate on the whole year between tours with Cavalera and Mixhell. I really enjoy playing on stage…