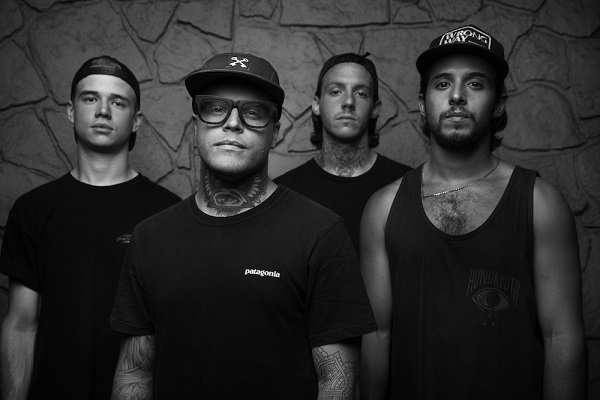 Hopeless Records also announced today the physical re-release of Hundredth’s entire catalog. This includes the band’s two full-length albums, When Will We Surrender and Let Go, on CD and exclusive vinyl variants, as well as the Revolt and Resist EPs available for the first time together on one CD.

Hundredth are currently writing their third full-length album, which will be released in 2015. Next month they are embarking on a North American tour with Every Time I Die, The Ghost Inside and Architects.

At home in Charleston, South Carolina we caught up with front man of Hundredth, Chad Johnson about the band, their recent signing to Hopeless Records, touring Australia and more…

So for those that haven’t heard of you guys, how would you personally describe the music of Hundredth?
I would say probably aggressive, meaningful, emotional at times, I don’t know, a passionate band, I hope people see us as that.

You’ve recently signed to Hopeless records, what does this signing mean to the band?
I think it means that our CD’s are finally going to be in stores *laughs* we’ve done a couple of them and they’ve just never been in stores, so it’s cool to be re-releasing old stuff and it’s a great team over there so we’re really excited for what we have coming with them.

With two albums and two EP’s out prior, how do you feel you’ve grown as a band musically with each release?
I think we’ve grown up and matured a little bit without losing our like childlike vibe to take risks and our childlike tour vibe, we’re not super serious all the time, we joke around a lot, but our music is serious to us and we take it seriously. So I think over the years we’ve just gotten better all-around in musical abilities and just as people and our viewpoints and the way that we see the world and things like that and I think we’re finally ready to usher in a new album and kind of shed light on what’s been going on the last couple of years with us and kind of like go out and get some new fans with a little bit of a newer sound but at the same time check back in with anyone who has ever heard of us or bought any of our albums in the past.

Are you going in to making this album with a different mindset to your previous releases?
I don’t know about a different mindset but we are going in a lot more prepared than we’ve ever been. I feel like a lot of our albums we’ve been rushing against a deadline, but we got ahead of this one early because we were dealing with all the contract stuff with the new label and we were able to just not worry about it and leave all that up to our manager and us just focus on the music while all that sorted out. Instead of the labels saying we need masters on this date, we were able to just go ahead and start and now we’re ahead of the game and I think we have sixteen demos now for songs and that’s more than we’ve ever had going in to recording an album, so we’ll be able to pick and choose what’s good and what we like, and we’re finally going to a producer this time around too so that should add a different side to it as well.

When can we expect to hear something do you think?
Well we’re going in to record Christmas day, the day after Christmas just because our schedule is so crazy, we’ve got to get a good time to record. So I imagine spring, which would be your fall.

In terms of touring what do your plans look like at the moment?
We’re doing a fair bit of touring, we’re going out in The States with Every Time I Die and Architects and The Ghost Inside until the end of the year I believe we are going out in the States again in spring and summer and to Europe and I think we’re maybe going we’re going to Australia at some point too, I’m just not sure of the exact date. So it’s going to be a busty year for sure.

So no firm plans yet to come and see us in Australia?
Well we came over once before by ourselves but we’d like to maybe support an Australian young band this time around and see how it goes. We came a year ago, it was really cool, we love the country, the shows were small and intimate but they were really cool and a lot of people have been waiting for us to come over there for a little while so it was finally cool to be able to do it. We had some cool bands supporting and it was our twelve days at most quick little tour but we really enjoyed it.

As a band for six or so years now, what have you learned in your time together that you had no idea would be involved when starting the band?
I would probably say business, because I didn’t think about business at all when we first started the band it was to maybe go out on tour a couple of times and maybe put out a CD and then now you have to make decisions based on things like our bass player who has settled down and has a child and everyone has priorities and stuff so looking at things from like a business mindset and still balancing our passion for playing music at the same time. I think I never expected to have to make decisions in that grey area of whether it’s for music or for business, so balancing that is kind of tough at times, but overall I think we’re starting to get the hang of it and as long as we give back and we do things that aren’t money hungry all the time, then people appreciate it. Like if we give stuff out for free, or play shows at people’s houses, or just keep it DIY like when we started, that’s a good balance. I never thought we’d be making decisions like that but I’m glad that I am now.

Lastly, let’s look ahead, let’s predict the future, so finish this sentence for me, in 2015, Hundredth will…
Hundredth will tour a shit-tonne… *laughs* There has to be a hyphen in there…