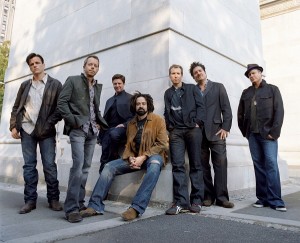 Iconic alt-rock band COUNTING CROWS make a welcome return to Australia this April for headline dates around the country, including a previously announced appearance at Byron Bay Bluesfest.

Currently touring their native US in support of their long-awaited seventh studio albumSomewhere Under Wonderland, the band are renowned for creating unique and innovative concerts, and are consistently ranked as one of the top live bands performing today.

Enchanting listeners worldwide with their intensely soulful and intricate take on timeless rock and roll, Counting Crows will embark on a national tour with a set list encompassing hits from throughout their 20-plus-year career – such as ‘Mr. Jones’, ‘Accidentally In Love’, Big Yellow Taxi’ and ‘Colourblind’ – as well as tracks from their Billboard top ten album, Somewhere Under Wonderland.

“I would always be excited about a trip to New Zealand and Australia, but I think this time it’s a little closer to my heart because I got so sick last time and missed the New Zealand gigs. You don’t get to travel to the other side of the world every day so I hate to miss out on any part of it,” said Adam Duritz.

Tickets will go on sale at 10am Wednesday December 3.

My Live Nation members can be amongst the first to secure tickets during the pre-sale beginning at midday Monday, December 1. For complete tour and ticketing details, visit:www.livenation.com.au

Counting Crows continue to be propelled by the same earthy passion instilled in their songs since their debut. The band recently released their seventh studio album, Somewhere Under Wonderland, to rave reviews. This album is the band’s first new material since 2007.

With Somewhere Under Wonderland (out now through Universal Music Australia) Counting Crows have delivered nine sprawling songs that yield some of the most grandiose, yet intimate material so far.

Don’t miss the opportunity to experience one of the most dynamic live bands performing today.

Also appearing at the Byron Bay Bluesfest on April 2

TICKETS ON SALE
10AM WEDNESDAY DECEMBER 3