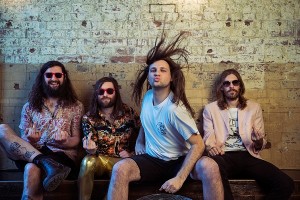 To say 2014 has been a bit of a whirlwind year for The Bennies would be somewhat of an understatement. And if you know anything about The Bennies, you’d probably appreciate that they’ve no time for subtleties.

In the midst of a mental touring schedule, The Bennies will release their brand new EP, Heavy Disco digitally on Poison City Records on November 11 before a January 16 vinyl release. Featuring five tracks recorded at party fever pitch, it’s immediately apparent that the new songs were written on the giddy apex of a touring high. Seamlessly blending genres into memorable party bangers Heavy Disco is the raspberry UDL in a bathtub of Crownies.  Unabashed, unafraid and terrifically tasty.

Content to operate under the cloak of Australia’s live music underground for many years, The Bennies never seemed particularly likely candidates for a crossover. Afterall their music flirted with so many inherently unhip genres and taboo subjects that their music deftly defied definition. But all of these factors that would work against any other band in the world, would go on to land firmly in The Bennies’ favour. 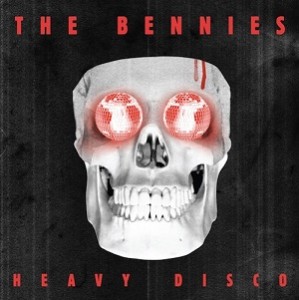 Following the release of breakout (and The Age Music Victoria Award nominated album) Rainbows In Space via Poison City Records in 2013, The Bennies have toured China and the USA, and completed multiple laps of Australia in the company of Morning Glory, Dead Kennedys, Jeff Rosenstock, The Smith Street Band, Dune Rats and Kingswood. Not to mention a set at Melbourne Soundwave which boasted such an epic crowd response that the band were promptly invited back for the entire tour in 2015.

With a touring schedule that would bring tears to the eye of the most seasoned roadie, The Bennies literally refuse to lie down. They are currently touring the USA, lending their chillest reggae-infused vibes to even the hardest cities in the north (what’s up, Detroit!), and teaching the world how to #photobong, before they arrive in Florida to tackle the punk rock Holy Grail; a set at The Fest.

Upon their return to the country, The Bennies will tour Australia in support of the legendary kings of crust NOFX, before smashing out NYE On The Hill and skanking into 2015 with eyes firmly set on Soundwave Festival and beyond. The future’s not just looking bright for these boys, it’s gonna be a blinder.

THE BENNIES – ‘HEAVY DISCO’
Out November 11 via Poison City Records