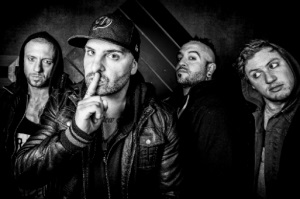 Eleven Seven Music Group is proud to announce the signing of Aussie rockers, My Secret Circus. “For a US label to sign an Australian band there has to be something special,” says CEO Allen Kovac. “When My Secret Circus releases their first album on Eleven Seven, the world will be introduced to a very special artist.”

MY SECRET CIRCUS merge rock, groove, and catchy vocals to create a memorable anthemic sound making their live show one that shouldn’t be missed. They have played at some of Australia’s premier live music venues, and have shared the stage with iconic bands including; Van Halen, Aerosmith, and Karnivool. My Secret Circus consists of (vocalist) Dan Marazita, (bassist) Pep Sammartino, (guitarist) Vinny Mancuso, and (drummer) Shane Evans. In 2010 MSC released their first EP presenting the single “No Cure” which was later featured as the theme for Foxtel’s Max’s Muscle TV.

The band was thrilled to sign their deal with Eleven Seven Music Group. “We were very much aware of Eleven Seven Music and all the great work Allen and the team have done for so many years with so many great bands we grew up listening to. It is such an honor to be a part of a great team and close family of bands that have had great success in the past till now. Eleven Seven, in my opinion, are the last remaining true rock label still going strong. We feel this is such a perfect fit for MSC moving forward and we are looking forward to an exciting time ahead.”

“An amazing high energy show that will keep you fixated from the minute they take the stage to the minute your ears stop pounding. My Secret Circus are an Australian force to be reckoned with. Rock songs delivered with power & precision.” – BEAT MAGAZINE