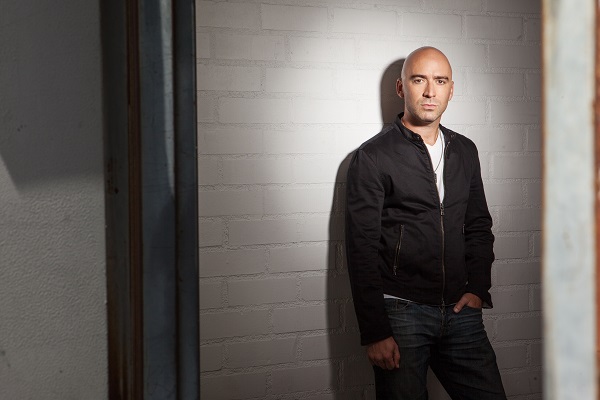 “I’ve been continually blown away but not only how much fun I have but by how much the fans enjoy it, and I really feel like I’ve gotten better at it over the years because like having done all the shows I’ve done to where the sets are really now these emotional trips over maybe over an hour and half or two hours that really get to the heart of who I am and what I do as a singer and a song writer…”

From Bio: Ed Kowalczyk, the legendary lead-singer and songwriter of the multi-platinum rock band, LIVE, left the band in ’09 to pursue a solo career and open a new chapter in his already illustrious career. With over 20 million albums sold worldwide and nine Top 10 hit songs, which includes the crossover smash “Grace” from his debut solo album, and classics such as “Lightning Crashes”, “I Alone”, “Selling The Drama”, “The Dolphin’s Cry” and “Heaven”.  Kowalczyk introduces his newest creative offering…the intimate, acoustic production – “I Alone” Acoustic.

On a rare occurrence at home in Connecticut we caught up with Ed Kowalczyk to talk about his upcoming ‘I Alone’ solo acoustic tour of Australia, new music and also looking back at how ‘Overcome’ became what it was…

You’re heading back to Australia next month, but this time solo and acoustic, what was the idea behind this upcoming tour?
Well I’ve been performing about half my concerts since I went solo about five years ago, yeah fifty to sixty percent of my performances are some sort of an acoustic show, usually with myself with another instrumentalist, but this one will be just me so it will literally be ‘I Alone’, but sometimes it’s I alone plus one *laughs* but this time it’s just myself.

So what’s the process like creating a set for an acoustic show compared to your standard rock show?
It really is a lot different in the sense that the pacing really revolves more around the intimate experience you’re going for with the audience to try and make it flow according to the different dynamic is necessary when you don’t have a band. I really enjoy it because these songs, the lyrics and the melodies I write really start in this acoustic place anyway, so it’s a very natural sort of return to the essence of what I do, and it works well in the concert. I’ve been continually blown away but not only how much fun I have but by how much the fans enjoy it, and I really feel like I’ve gotten better at it over the years because like having done all the shows I’ve done to where the sets are really now these emotional trips over maybe over an hour and half or two hours that really get to the heart of who I am and what I do as a singer and a song writer.

In doing this acoustic set, have you found that some of your songs actually take on a completely different vibe when performed this way?
You know, yes and no, and again being as they all pretty much start this way the intent if anything for some of the older songs say like ‘I Alone’ or some of the songs from my newer albums as a solo artist really in some ways the intensity notches up a bit. I don’t change the arrangements much, I just bang like hell on the acoustic guitar when it’s meant to rock *laughs* and somehow it sort of does.

Is it a somewhat more daunting exercise when you’ve really got nowhere to hide when you’re up there solo?
Oh definitely, it’s definitely challenging, it’s a physical challenge as well, because you’re the rhythm, the chords, of course the singing, you’re really moving the entire show yourself but at the same time when you do have a great one, it almost feels better and more gratifying in a way because you know you’ve climbed the mountain and gotten to the top with a lot less help, so it feels great.

I saw you back in maybe 2006 play a Max Sessions at the Seymour Centre in Sydney solo and acoustic and you’re returning to the same venue for these shows here, do you have any memories of that?
You know, a little bit, you know I’ve been to Australia a little bit and this is my fourth trip as a solo artist and counting my trips with Live I have to say as the years go by, especially the 90’s and even approaching now into the 2000’s it’s a little blurry *laughs* but I’m sure the venue will kick my memory into gear but I do vaguely remember it was a promotional thing and I do recall the venue being pretty cool.

It was, I got to basically sit right behind you and it was an amazing experience…
Oh yeah, yes I do, it’s in the round, now that triggered it, I remember.

Australia has always had a love of your music through Live and your solo material, what do you think it is about Australia that just gets you?
It’s one of those mysteriously beautiful things that’s hard to pinpoint and it has really been such an incredible ride in all the aspects of my career in some twenty odd years of coming to Australia. There’s such a loyalty, such an intense interest in the music and in my lyric and just in the whole package of what I bring. It’s really hard to say, there are markets like that and countries that you visit where you just feel that extra special energy, that’s really a question you’d almost have to ask the fans *laughs* because, well what’s cool is I actually released a DVD of my trip there in February where we celebrated the twentieth anniversary of ‘Throwing Copper’ with a full band and one of my favourite parts of going back and watching it and screening it was the interviews that Moshcam did with a few of the fans before the show, which I didn’t know that, so I was really blown away and what a few of the people said was really sweet and really deep, just how uplifted they remained by my music and how it’s helps them and how they consume it in a really deep way and it really adds inspiration and that to their lives and it was really wonderful to watch and I was actually tearing up watching it because I was so surprised that they’d done it, it just struck my heart, it was really beautiful.

You mentioned that you were here earlier this year for the twentieth anniversary of ‘Throwing Copper’ with an unbelievable reception. Did it blow your mind that something you created two decades ago is loved just as much now as it was back then?
Absolutely. Song writing is such an intimate, personal process that when you’re doing a record like that, and writing anything really, back then I was just starting out and you’re writing songs like ‘I Alone’ and ‘Lightning Crashes’ and you’re sitting there with your guitar thinking, ok, well, you know, maybe I’ll get to do this again, maybe somebody will like it, and to be able to pinch yourself twenty years later to say not only was it super successful over the years, it remains important to people and that’s a really wonderful thing that you’re hopeful of but you can never really imagine it until you’re doing it, it’s incredible.

So back to the Max Sessions, to get in I actually had to send in a question I’d ask you but never got the opportunity to do that. So let’s some eight years on see how we go. What I asked back then was after the 9/11 tragedy ‘Overcome’ became somewhat of a major song that people took to, how did it feel for you to have a song that took on this truly special life?
Oh my Gosh, you know, it was really an amazing time, very bittersweet being from the East Coast and having such a kinship with New York and Washington DC and also western Pennsylvania where part of my family is from, so as an east coaster in the US, it was that much more impactful I think, and then to have a song that kind of spontaneously grew into this almost a hymn for people to consume it and help them carry the terrible emotions and emotional turmoil at the time, to be able to help them that way and to have survivors and families of survivors, to military personal, over the last years since 9/11 so many people have expressed to me how much that song helped them and it doesn’t get any better than that. Again, bittersweet, but it doesn’t get any better than that as a writer where you really feel that you’ve done something really special.

I have to say, in 2001 after 9/11 when you toured and played at the Sydney Entertainment Centre there were some New York firefighters in the audience which for me stands out as a magical moment.
Absolutely, and its ongoing, we honour the anniversary again, I still live about fifty miles from Manhattan and it’s a really deep thing and that song will always resonate with that event for me and lots of people, the irony is that it was a song that was written before, it was a song that was sort of buried on the ‘V’ album, and really, the words ‘meant to be’ kind of come to mind, the synchronicity and the fact that it was there and it was never really intended to be the focus track or a single or anything like that because of the arrangement and type of song that it was, the fact that it was just sitting there waiting and available at the time was something very mysterious and awesome about that and it’s a song that in my career, that one and maybe ‘Lightning Crashes’ have maybe resonated with that type of energy and association with events. Again as a writer, you can’t ask for more than to do something like that.

With two solo albums under your belt now, are you currently or constantly working on new material for future releases?
Well I have two solo albums and an EP called ‘The Garden’ that came out a year or so ago, a little bit before the last album, so three releases now as a solo artist and I’m working now on the fourth and I have oh gosh, somewhere between five and ten things that I feel at the moment pretty good about and I plan to get in the studio with those really early in the year next January, and hopefully have some form of it out as an EP or something in the Spring. I’m always writing and I always like to keep things coming just about every year.

So lastly, let’s predict the future, so if you can finish this sentence for me, by the end of 2014 Ed Kowalczyk will…
Be happy… that’s easy… *laughs*

Catch Ed Kowalczyk at his ‘I Alone’ tour at the following dates:

THE TIVOLI, BRISBANE
THURSDAY NOVEMBER 6 – on sale at 10am Friday, October 17

Latest release: The Flood and The Mercy (Out Now)