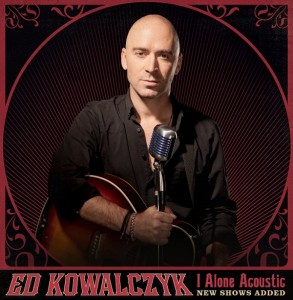 After selling out the previously announced Australian shows and adding an extra show in Sydney, ED KOWALCZYK will extend the ‘I Alone Acoustic Tour’ this November to include Brisbane due to the overwhelming demand from his dedicated Queensland fans.

The legendary songwriter and former lead-singer of the multi-platinum rock band, Live, Ed will perform a set of breathtaking solo-acoustic headline shows, now kicking off at The Tivoli in Brisbane on November 5.

Tickets for this show go on sale at 10am Friday, October 17 and are strictly limited.

My Live Nation members can be amongst the first to secure tickets during the pre-sale beginning midday Wednesday October 15.

Remaining tickets for all other shows are on sale now. For complete tour and ticketing details, visit: www.livenation.com.au

Ed Kowalczyk has built one of rock’s most impressive resumes.

His band, Live, became one of the most successful and enduring alternative bands of the last twenty years, with more than 20 million albums sold worldwide. Among this catalogue are some of alternative rock’s most iconic hits, including “Lightning Crashes”, “I Alone”, “Selling the Drama”, “The Dolphin’s Cry”, “Overcome” and “Heaven” – many of which have been responsible for shaping the musical landscape for alternative rock around the globe.

In 2010, Ed released his first solo album Alive, which spawned the hit single “Grace”, which was followed in 2013 by The Flood and the Mercy, which featured the hit song, “Seven”.

For his newest creative offering, the ‘I Alone Acoustic Tour’ – a nod to one of his most famous lyrics – Ed will appear onstage with an acoustic guitar, some of rock’s most profound anthems and the voice that has attracted legions of fans for more than two decades.

“I’m so very excited to be performing down under again this year!” says Ed.

“I absolutely adore my Australian fans, and look forward to being with you all in Sydney and Melbourne for these intimate, acoustic performances. See you soon!”

Earlier this year, Ed celebrated the twenty-year anniversary of the release of Live’s seminal album Throwing Copper with Australian audiences.

The ‘I Alone Acoustic Tour’ will give Australian fans the chance to experience these beloved songs on a completely different level, stripped back, intimate and bare boned

TICKETS ON SALE
10AM FRIDAY OCTOBER 17

REMAINING TICKETS FOR ALL OTHER SHOWS ON SALE NOW