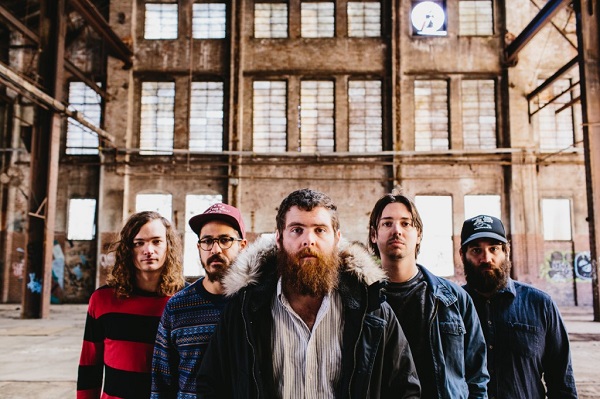 “In the past we had a producer or someone involved that was able to tell us “That’s great” or “That’s awful.” After 12 months of working on something you can get it in your own head and have no center on what is good. In the end it brought us together into something bigger and better.”

From tour release: Atlanta rockers Manchester Orchestra have announced their return to Australia with a run of East Coast dates. The band will be touring in support of their fourth full-length album Cope, out now via Caroline Australia. Cope was self-produced alongside their long-time collaborating partner Dan Hannon, and mixed by John Agnello (Dinosaur, Jr., Kurt Vile, The Thermals, Sonic Youth) at Fluxivity Studios in Brooklyn. They recorded the entire record in the home studio they built themselves after six months spent gutting and refurbishing the old house they used to live in together. Cope is the follow up to 2011’s critically acclaimed Simple Math. The passion and intensity found within the band’s catalogue translates into a live show not to be missed.

Thanks for your time today, of course we’re here because you’re heading back to Australia this November for a run of East Coast shows, now for those that have never seen you before, how would you best describe a typical Manchester Orchestra show?
Most people always walk away saying it was loud. Hopefully not too loud. But we try to mix in a bit of everything and make it as dynamic as possible. For us, a show should flow start to finish like a record and be an experience that everyone on and off stage is going through.

In being to Australia before, do you have a great memory of a previous trip here that you can share with us?
Honestly, too many to share. One that will always stick out was being at Splendour in the Grass. We got to stay near the ocean, met so many great Australian bands and played one our favorite shows ever.

The tour is in support of your newest album ‘Cope’, are you excited to share these new songs with a live audience?
Absolutely. You work so hard to get an album to sound the way it does, then when you play it live it becomes something new. That new sound is something we can only share directly and being able to take it all over the world is amazing for us.

With four albums in the catalogue now, does it become somewhat harder or easier to shape a set list these days?
It’s like pulling teeth! They don’t all fit but you gotta make room for new songs and keep the set exciting.

You’ve got Kevin Devine along for the ride on the tour, so, a long shot, but is there any chance we may see Manchester Orchestra and Bad Books come back as a double headliner to Australia in the future?
With KD, anything is possible. We do everything in our power to try and end up on tour with him.

On the album, what I loved about it is that it’s 38 minutes, and a straight up rock record, was that your intention in making the album?
It took about 6 months of writing before we really had a direction for the record. We finally all sat in the studio and came up with our mission statement; we wanted to make an abrasive rock record. We felt like it was something that’s missing from alternative music. Everything is synth based with tracks and we just wanted to shift it in another direction.

So was there a specific inspiration behind ‘Cope’ as an album?
It was somewhat a reaction to everything that was going on around us. We were between labels and had to take everything in house in order to sink or swim. The album is our band relying on each other to move forward and make it to the other side.

As a band now for ten years, has there been one moment in that time that stands out as something you never thought you’d be able to do?
Pretty much everything! Music growing up was something I did in my parent’s basement or someones garage. So every time I go somewhere for the first time it blows my mind that my hobby/now job is taking me places.

What do you feel has been the biggest challenge you’ve had to undertake in your time together?
I think COPE would have to be… It forced us to be the ones challenging and pushing ourselves. In the past we had a producer or someone involved that was able to tell us “That’s great” or “That’s awful.” After 12 months of working on something you can get it in your own head and have no center on what is good. In the end it brought us together into something bigger and better.

With Andy making ‘Architect’ with Scott from Frightened Rabbit, can we expect any further Manchester Orchestra collaborations with any musicians in near future?
We have always been into collaborating with friends. We have done tons of splits with bands and plan on continuing. The key is to let them happen and not force them. That’s how Bad Books became a band!

Do you have a message for your Australian fans?
To jump back 3 questions, I never thought we would have Australian, or any fans. If it wasn’t for every one of you we could never do what we do and are truly grateful.

Catch Manchester Orchestra at the following dates in November: