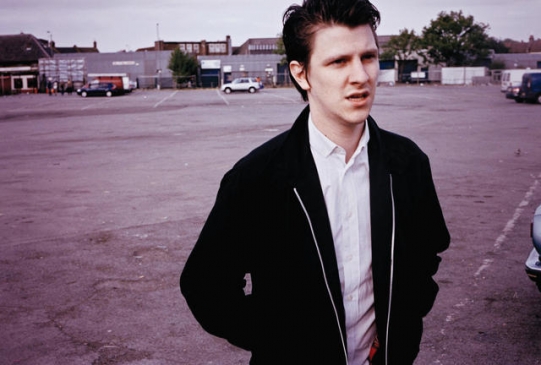 “I think I’ve grown up probably quite a lot in the interim period, I think that’s kind of made my music a bit more inward… the early stuff was more kind of outwardly looking at things and stuff, whereas this record was probably a bit more inward.”

From release:  “Jamie T is releasing his third and much-anticipated new album Carry On The Grudge on 26th September. The album is his first album since 2009’s Kings & Queens and reintroduces one of the most distinctive voices in British music over the past decade. The album announcement follows the incredible reaction to Don’t You Find, the first piece of music Jamie has released in over four years. Carry On The Grudge is a big step forward. Musically and lyrically, it’s a boiled down, intense listen, with not a word or note wasted. The likes of Zombie recall the urgency of Jamie’s past records but it’s balanced with the likes of They Told Me It Rained and Mary Lee. The old influences of punk, folk and reggae are all still here, but reshaped into something new whilst still defiantly the work of Jamie T.”

We chatted to Jamie T at home, and he filled us in on his new album as well as touring, cover songs and more… you may not know him, but we sure think he’s one of the Best Things You’ve Never Heard…

Thanks for your time today, Jamie, now, this is your first album in five years, why was now the right time to release new music?
Well I suppose the music was ready, that’s it, it was always just relying on when I thought it was ready to release, so I suppose that’s the answer really.

So you took some time off to write the new music and it all just came together at the right time essentially?
Yeah I think so, there were a couple of times when I thought that maybe the album was finished, but after leaving the studio for a few weeks and having a listen I thought I just wasn’t there yet, so I went back in and I didn’t want to release until I was completely happy with the record.

I know this is corny, but as it is your third album, can you give me three words that you feel sum it up perfectly?
Three words that sum it up… ‘I don’t know’… there you go, that’s a good one, you have it! *laughs*

Your album is called ‘Carry On The Grudge…’ so is there a meaning behind that you can share with us?
Kind of, it’s a vague meaning really, it came from a conversation I was having with a friend about trying to form your own opinions as a young adult and trying to take away all the stuff you’ve been taught, or lead to believe by other people, and I’d been sitting down setting aside a lot of grudges that other people have given you, you know? That’s kind of where it comes from, it also sounds good, there’s that too.

So in the time between albums, was there a major inspiration behind the songs that became the final result?
The major inspiration behind it, I can tell you sound wise what the inspiration was, there was a couple of records I really enjoyed listening to in the time, things like Blur ‘13’ and a particular song by a band called Marcy’s Playground called ‘Sex and Candy’ which I really liked, and I really wanted to make records that sounded like those records and quite kind of thoughtful stuff. So I certainly had an idea of what I wanted to do, but it took me a long time to get there in the end.

What’s the most important part of song writing for you?
I don’t know, I suppose taking in information, reading books, listening to music, watching movies, I think that’s really important, and I like reading a lot because I like seeing words on pages, it gets my mind kind of snapping and it keeps me from writing the same thing over and over again, so I think just kind of being a sponge from what’s in front of you is the most important thing.

I love the ‘Zombie’ video, can you tell us a bit about the song and how much fun it was to make the video?
The song is about kind of being in your mid-twenties and feeling teenage angst and kind of not understanding why. The video kind of obviously came out of the title of the track, but it was the hottest day of the year over here, so filming it was a fucking nightmare… to be honest, it was a pretty fucking horrible day but I’m glad we all got through it. There’s one thing you don’t realise which is until all your friends around you are dressed up like dead people  is that you kind of look at your friends faces for some acknowledgment that you exist, and when your friends all look like they don’t exist, it makes you a bit anxious to be honest…

I must say, it was a cool clip, in particular your bass player with only one arm…
You know for some reason he’s a talent, I was saying that if for some reason he ever wanted to leave music he could go into acting on some level, because I was pretty amazed by how he did it.

How do you feel you’ve grown as an artist from when you began until now?
I think I’ve grown up probably quite a lot in the interim period, I think that’s kind of made my music a bit more inward… the early stuff was more kind of outwardly looking at things and stuff, whereas this record was probably a bit more inward. So it’s certainly kind of taken me there, as a song writer I think I’ve become less concerned in what’s going on around me, certainly on this album anyway. So who knows where we go next, but it’s been a strange one as people have obviously watched me grow up through music as it were, and everyone has a fucking opinion on it, but I’m not sure that ever really matters.

Well as long as your opinion matters that’s the only opinion that matters…
*laughs* yeah I think so.

With the new album out now, has that re-lit a fire under you and are you still writing with a chance of newer material sooner rather than later?
Certainly playing live is something I missed doing while writing for this album because playing live and having an audience to bounce things off is really helpful, so to an extent yeah, I have always written daily, and I still do now, but I tend to write for myself before I do anyone else and that can make the songs just sound like other people’s songs, so then I have to stop writing for myself and write professional music for a living. I have been writing but I don’t know if it’s anything I would release, it’s kind of like I’m in training for writing a new album if you know what I mean. So I’ve got time…

Maybe you can try and write Blur’s ‘14’ or something like that…
*laughs* yeah maybe, I don’t know if it would be as good, but I’d give it a go.

Touring wise, you’re selling out UK shows all over the place, what else can we expect in terms of touring on the back of this album?
Well I’m hoping to quite a lot of touring, I mean I have to be a little more careful how I tour this album as in the past I’ve hurt my voice from touring too excessively, so that’s something I have to keep in mind. I think I can kind of tour more if I tour less if you know what I mean? Shorter periods of touring but hopefully I can span it over a year a year and a half… I would like to tour a lot but we’ll just have to see how much of it I can do really.

So when do you think we can expect to see you in Australia?
I’d love to, it’s certainly on the cards I’m sure we’ll make it down there at some point very soon, I don’t think anything is in the diary as of yet, but I’m sure we’ll be with you before you know it. We’ve been down there a few times in the past and I’ve got family down in Australia, so it’s a place I’ve got a lot of affection for really. So I’d love to come and play again, it’d be exciting for me.

Is there one song from any artist or any band that you consider perfection?
You know what? As of today, I was listening to Jeff Buckley’s ‘Hallelujah’ and I know that’s not written by him, but that version is fucking perfection, personally I prefer that version, I think it’s fucking amazing, but as of today I’ll say that song. It’s done so well and as a cover as well, it’s just killer. He totally brought it back and did it in his own right, it’s an amazing song.

If there was one song that you’d want to cover, what would that be?
There’s lots of songs I’d love to cover, and there’s one I’m looking forward to doing that I think we’re going to do next week on a radio show over here, is a song by a man called Townes Van Zandt so it’s a song called ‘Waiting Around To Die’ and I’m a little nervous about covering it because I can already hear some kind of a voice in the back of my head going ‘you heathen, you charlatan, what are you doing to this beautiful song you fucking lowlife…’ but I’m really looking forward to covering that, so that for the moment, hopefully we’ll try and play that live a few times I think.

So with a new album out does it get harder to structure a set list or do you ensure you throw in a lot of newer material?
Yeah it’s a bit hard as the new stuff is quite a bit different from the old stuff so there is quite a bit of a struggle putting it together, but I think part of the fun of recording new albums and going out to try and promote them is that your old self can take a bit of a back seat and start with the new stuff and towards the end of the set start bringing back some old songs for the fans and stuff. So I’m not going to worry too much about it, those kind of things tend to sort themselves out after like ten gigs you have the really good set list, and I normally run like seven set lists and we interchange them throughout the tour.

Lastly, let’s predict the remainder of the year, so finish this sentence for me, by the end of 2014, Jamie T will…
*laughs* be in your neighbourhood…

Sounds like: Singer Songwriter with a whole range of influences