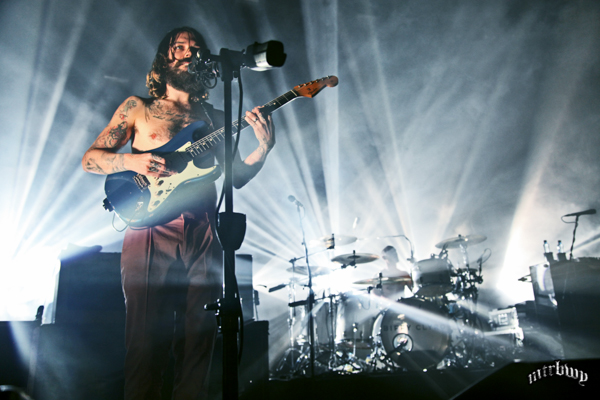 After their amazing run in February for Soundwave, Biffy Clyro have returned to our shores twice in one year to give those that may have missed them then the chance to marvel at one of the most amazing live bands I’ve ever witnessed.

Calling All Cars get the job of warming up the crowd tonight and doing their best to do just that. Let me just say wow… This is one impressive act, not only in terms of songs but in terms of presence, and the mix for these guys is outstanding tonight. Tight is one word I could use to describe CAC and that always impresses me, not a note is missed, there is no lull in their set, this is a fuckin rock and roll band! Case and point as their singer takes his mic and heads into the middle of the crowd, yes, on the floor and that rules. I honestly hadn’t had the chance to see CAC after the BDO incident of 2012 when I wanted to see them, but I’ve made up for lost time and more tonight. This is a band you need to see live.

Biffy Clyro. With what could only be called what I think a Scottish haka would sound like opens the show and with a simple ‘hello’ from Simon, and the show opens with ‘Different People’ from ‘Opposites’ and it’s on. This first song may as well have been an encore as the energy exuded straight off the bat is amazing, and this is what I love about this band, they just play Rock and roll and love it, they put everything into their craft and it truly shows. Holy shit, the heaviness of ‘That Golden Rule’ is intense and it’s hard to simply not watch these guys, it’s mesmerizing and these guys are one tight band.

With a ‘hey’ it’s time for ‘The Captain’ and the sing along for this one shows the love for this band, a love that is kinda hard to put into words, as Biffy Clyro isn’t really a ‘hey I might go and catch that band’ kind of band, everyone here LOVES this band and it’s a really cool vibe in the room tonight because of that, and as the lights flare and the band play on, I think this is a show tonight that is something that truly needs to be witnessed to be believed. As ‘we are Biffy Fuckin’ Clyro’ is proclaimed to a cheer, ‘Sounds Like Balloons’ sounds better than it does on record and I get the feeling that I’ll just sound like a glowing fan boy in this review, but it’s hard not to when only a few songs in how good this is.

‘Joy.Discovery.Invention’ to me sounds like the best Nirvana song never released as the tempo comes down a little from the original onslaught, but no sooner have I said that then does this song explode into a wave of heaviness. Wow, and to say the next song was a moment would be an understatement, that was so great to be a part of as this big ballad ‘The Thaw’ just won everything. Then as the reds and greens light up the stage and ‘Who’s Got a Match?’ takes its place in the set, there is plenty of love her for it. We get a whole lot of hooks with ‘57’ and in terms of a chorus, I’m in love, seems many more here are too with a sea of fists being thrust at the stage with a ‘hey’ they are into this.

What I really enjoy about Biffy Clyro are the way these songs are arranged, these songs musically are just so for lack of a better word, great and ‘Victory Under The Sun’ shows this perfectly. Then ‘Biblical’ is nothing short of magical and if not only for its ‘whoa oh oh ohs’ that just make it a perfect live song. So fucking good. As they just continue to deliver song after song of greatness like ‘Wave Upon Wave Upon Wave’, Simon grabs the acoustic guitar for a solo version of ‘God & Satan’ and even with an acoustic he exudes the same amount of passion than when he’s jumping around the stage, but no sooner has that moment finished we get straight back into the rock, and do we ever, as the strobe lights make it very hard to write this, they belt out ‘Glitter and Trauma’ and as everything else tonight, it is as tight as that lid on the jar you just can’t open no matter how hard you tap it on the bench, I mean this band have it down, and it’s not only Simon that is the focal point, it’s almost impossible to know where to look as both Ben & James Johnston are just as active and make this band the live presence they are today.

The intro to ‘Living Is a Problem Because Everything Dies’ and subsequent song was spectacular as was ‘Many of Horror’ which to me is one of their more epic style songs and just listening to the crowd get into this one was really cool to not only witness but be a part of. ‘Woo Woo’ was a great addition, and as ‘Black Chandelier’ is announced there is a whole lot of love and rightfully so, what a song, definitely a highlight of the evening so far. ‘Bubbles’ and its perfectly bouncy chorus allows me to watch the entire crowd in front of me move together and jump in unison and thrust fists forward with so much admiration and respect. As they hit the last note they leave the stage as the ‘mon the biff’ chants begin, we await their return.

Simon emerged once again with an acoustic and produces ‘Machines’ but as the rest of the band returns they hit us with the machine gun blazing ‘Stingin’ Belle’ again from ‘Opposites’ and I love that the band has played almost half if not more of that album tonight, and as I mentioned at the beginning of this review about the love for this band, the ‘no new stuff’ rule does not apply here, as the newest material was some of the best received tonight. Leaving us with the only song they could, we get ‘Mountains’ and of course, the place goes nuts, it’s kinda hard to explain the atmosphere unless you were there, but there isn’t a missed note, a missed vocal, this is consummate professionalism, and the harmonized ending of this song shows that. Simon once again proclaims that they are ‘BIFFY FUCKIN’ CLYRO’ but this time just a little louder than before, and with that the band leaves the stage, the house lights come up and there’s not a face I can see without a look of amazement and a smile on it.

For three shirtless dudes from Scotland, these guys know how to rock and rock hard. By far one of the most impressive shows I’ve seen in a long, long time. Mon The Biff indeed.

Different People
That Golden Rule
The Captain
Sounds Like Balloons
Joy.Discovery.Invention
The Thaw
Who’s Got a Match?
57
Victory Over the Sun
Biblical
Wave Upon Wave Upon Wave
God & Satan (Solo Acoustic)
Glitter and Trauma
Living Is a Problem Because Everything Dies
Many of Horror
Woo Woo
Black Chandelier
Bubbles