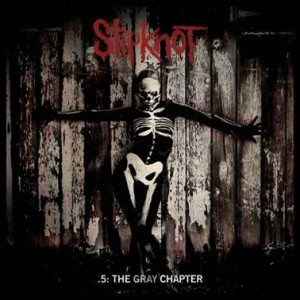 Hot on the heels of their inclusion as a headliner on the 2015 Soundwave line-up, Slipknot has announced the next phase of their uncompromising history – the release of .5: The Gray Chapter. Their fifth studio album, .5: The Gray Chapter will be released in Australia on October 17th.

Slipknot unleashed The Negative One earlier this month, marking the ground-breaking band’s first new music in more than six years. The song immediately hit #1 on the iTunes metal and rock singles chart with the band and track both trending on Twitter.  Meanwhile its nightmarish companion video – directed by band member M. Shawn Crahan (Clown) – has quickly drawn more than 2 million individual views at Slipknot’s official YouTube. The second track from the album has also just emerged this week – the ominously titled The Devil In I.

Slipknot emerged at the tail end of the twentieth century and quickly established itself as the most enigmatic, provocative, and aggressive collective of the modern era. 1999’s Slipknot stands as a true milestone, named by Metal Hammer as the “Best Debut of the Last 25 Years”. All told, the band has 11 Platinum and 38 Gold record certifications around the world – all four of their albums are Platinum in Australia. All Hope Is Gone debuted at #1 in seven countries, including the U.S and Australia. It remained #1 on the ARIA chart for two consecutive weeks.

Slipknot has ruled live stages across the planet since beginning and currently headline tours and international festivals including Mayhem in the US, the UK’s Download Festival, Brazil’s Monsters of Rock and Rock In Rio, Australia’s Soundwave Festival, and the bands own Ozzfest and Rockstar Energy Drink Mayhem Festival. 2012 saw the inaugural Knotfest draw over 45,000 fans to a pair of daylong festival events headlined and curated by the band and this year’s Knotfest will kick off their Prepare for Hell Tour across the US.

Slipknot will be appearing at Soundwave 2015