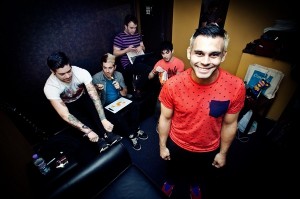 PATENT PENDING is an acrobatic gang of musical misfits from Long Island, New York. With a never-say-die attitude and enough live energy to power Times Square, we are proud to announce them as the second band to be added to the Soundwave Festival 2015 line-up.

Growing in size from basements to amphitheaters, from VFW Halls to sell out headlining shows in the United Kingdom, their live shows are psychotically fun and dramatically moving. Bowling For Soup gave them an opening spot on their massive UK tour in 2012, which led the band to return for multiple headlining tours and earned them a spot on DOWNLOAD FESTIVAL with the likes of Slipknot and Iron Maiden.

“These dudes have got spunk and energy, Patent Pending are super entertaining – boy do they put on a show.” – Vulture Hound

“Patent Pending are a fun live act from start to finish.” – Moshville.co.uk

“Patent Pending hit the stage running jumping and didn’t stop for the entire set. With an amazing stage presence and a array of jokes, stunts and cheesy boyband style dancing, they captured the crowd and set the tone for a lively, fun evening of pop punk tunes.” – Brumlive.com

PATENT PENDING have enjoyed the success of three music videos reaching the coveted #1 spot on MTV.com, with state side rotation on MTV, MTV2, MTVu, Fuse on Demand and Scuzz TV. “Dream Seeker Of The Year” video won a Billboard Music awards trophy and afforded them the honor of delivering a ground-shaking performance of their song “Dance Til We Die” in front of a National Television audience of over 8 million home viewers.