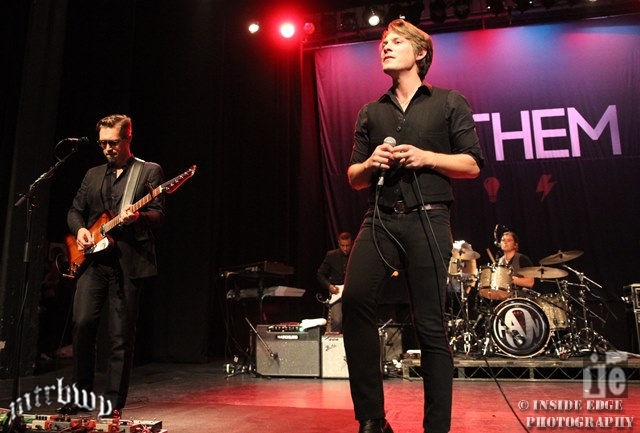 Just shy of two years ago I saw Hanson at this same venue and it was absolutely chock a block then, and from everything I’ve heard tonight will be no different. Here promoting their new album ‘Anthem’ the boys are back to perform, to entertain, and to once again hopefully shut those people up that may just still be a little stuck in 1997…

Adam Martin got the job of supporting tonight and although it’s always a tough job, he actually did quite well to engage the crowd in particular with his early cover of ‘Wonderwall’ that got people singing along. Throwing in smattering of originals in between the covers were crowd friendly enough to keep people interested for what is to come. Overall he had a good sound and good presence on stage for his short set.

Now, before the show even starts the atmosphere in here is electric, there’s a vibe and it’s amazing. Hanson means so much to those that have come out tonight and you can just tell that this night will be something special.

OK, I now officially can’t hear anything. The deafening screams I’m hearing right now are nothing short of astounding. This band is loved. I mean seriously loved by those here, it’s like nothing I’ve heard in a long time. As they grace the stage all dressed in black and waste absolutely no time in busting into the opener for the show and the first track from ‘Anthem’ we get ‘Fired Up’ and it is on. This is a show that tonight will not only surprise many but impress more and I’m not even joking when I say that the screams have been constant throughout this entire first song. What I love about Hanson as I’ve followed their career is watching them evolve into these absolutely astounding musicians and song writers, they have crafted their music to how they want and deliver it in a means that the ‘fansons’ that have been there since 1997 still have something to get excited over. Oh and I don’t just mean the women, I consider myself somewhat in that category too, yeah I’m not scared to admit I like Hanson.

‘I’ve Got Soul’ sums up what the band are all about these days as they dive straight into an old school favourite of ‘Where’s The Love?’ and the eruption was nothing short of staggering. Back to Anthem with ‘Scream and Be Free’ which got them going even more with some fun crowd participation, then into ‘Thinking of You’ which was a favourite but not as much as when the thumping drums of ‘You Can’t Stop Us’ happened and with Zac taking the lead on the vocals this song just raised the roof. Wow. As the entire stage is vacated to an audible interlude this early on I’m not sure what we’re in for here but let’s see as I’m sure it’ll be something cool. Oh here we go. Three acoustic guitars and three Hanson brothers take the stage as a sea of phones get lifted to capture this moment of fandom where they explain how they wrote some of these songs purely for their fan club which is amazing to hear as a fan of bands and music in general that a band takes the time to do something like this. Hearing a song like ‘On and On’ like this tonight is pretty amazing as not all those here would know it so it’s a nice live experience which will stick. As the acoustic guitars get put away and I get deafened purely by the fact that Zac took his hair out of its ponytail and I feel like Hanson can do absolutely no wrong tonight and I’m ok with that. Right now they’re playing ‘Weird’ and every single person here tonight knows it and is shouting the lyrics back to the stage, it’s seriously something to witness. Putting the guitars away they gather around one microphone to pay homage to the Bee Gees and sing the song ‘Too Much Heaven’ completely acapella and it’s nothing short of astounding. Two words. Vocal. Talent.

The band vacates the stage and leaves Isaac there with an acoustic guitar as the solos begin, he gives us a song called ‘Hand In Hand’ which was great, then taking it in turns, Zac gets his solo with a yet to be released song as he takes to the piano to give us a taste of ‘Get So Low’. Screams get louder as it’s time for Taylor’s solo… throwing in a big piano ballad ‘A Song to Sing’ which was as powerful as you’d want and expect. This part of the show to me just showed how each brother can hold their own and not have to ‘hide’ behind a band, but can play a song solo and it be flawless.

The entire band returns to the stage as Taylor jumps behind the drums and Zac takes lead vocals and piano for ‘Juliet’ from Anthem and watching the waving arms is testament to the fact that this is a new crowd favourite, then as ‘You Never Know’ gets a run along with ‘Tragic Symphony’ the mood subdued a little but not for long as Zac belts the cowbell signifying ‘Thinking’ bout Somethin’’ from previous album ‘Shout It Out’ and you can tell that this crowd knows their Hanson, they know the newer stuff, they aren’t stuck in a time warp and it’s something fun to be a part of, it continues with ‘Waiting For This’ from the same album… Whoa… The ground started shaking when ‘A Minute Without You’ happened… That was nuts. Actual nuts. What a song that is, and amazing to hear it tonight. Yes!!! ‘Penny & Me’ from my favourite Hanson album ‘Underneath’ which as you could imagine got a lot of love and sounded perfect as the harmonies these guys are known for shine through superbly and don’t miss even one bit, but now it’s finally a song for the five of us guys in the audience ‘Give a Little’ is up and is funky, plus any song with a key change is a winner in my books as you should all know by now.

My eardrums just completely punctured… Thanks for the warning guys… Yeah it’s ‘MMMbop’ and fuck you if you don’t like this song right now, this is awesome. This matured version of the song shows that with some age between the song and now that they can still play it and you know what? It’s actually a damn catchy song still. Hang on I just need to get into it for a minute. That. Was. Fun. Of course it was by far the biggest song of the night.

Jumping back from 1997 to 2014 and the first single from ‘Anthem’ with ‘Get The Girl Back’ as a sea of glow sticks are held aloft, which reminds me of a story when I saw Bon Jovi in 2001 in New Jersey and the glow stick plan during ‘Wanted Dead or Alive’ let’s just say I’ll tell you the story of my failed glow stick timing another time… but back to Hanson, and it’s funny putting this song directly after ‘MMMbop’ to see the contrast and what is interesting is there really isn’t much difference. Hanson have always delivered songs that are catchy, that are relatable and are just damn fun. I seriously love this band for what they do and continue to do.

‘Something Going Round’ keeps the vibe up as the band leaves the stage only to return very quickly for a well-deserved encore. Oh sweet, ‘This Time Around’ I wasn’t sure if we’d get this but here it is!! That’s such a big song and in this live environment is perfect, such a build, and such a fan favourite. Then to close the show we are ‘In The City’ and this is the perfect rocker this far into the set and to go out on a high. Instruments down, cheers and adulation that have to be heard to be believed, and the promise of a return soon, and why wouldn’t they?, they absolutely owned tonight and in fact owned the country as the Hanson love is deep and will be ongoing, mark my words.

In summary: I’ve said it before and I’ll say it again in no uncertain terms, throw away your preconceived notions of Hanson and just go to a show and witness one of the most entertaining and musically perfect live shows from ANY band you’ll ever see. I’m even more impressed than I was two years ago oh and also a little more deaf…

Set List:
Fired Up
I’ve Got Soul
Where’s the Love
Scream And Be Free
Thinking of You
You Can’t Stop Us
On and On (acoustic)
Weird (acoustic)
Too Much Heaven (Bee Gees cover) (acapella)
Hand in Hand (Isaac solo)
Get So Low (Zac solo)
A Song to Sing (Taylor solo)
Juliet
You Never Know
Tragic Symphony
Thinking ‘Bout Somethin’
Waiting for This
A Minute Without You
Penny & Me
Give a Little
MMMBop
Get the Girl Back
Something Going Round
This Time Around
In the City

Oh and if you missed it, check out our chat with Zac Hanson here…