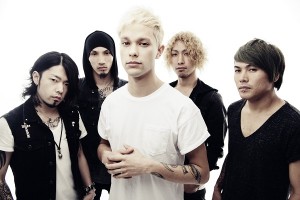 Nagoya rockers COLDRAIN have already made their mark in becoming a household name in their home country Japan and after building their international footprint with their blistering live show, we are thrilled to announce COLDRAIN on the Soundwave Festival 2015 line-up ahead of their debut international album, The Revelation out August 8.

After already conquering Japan, COLDRAIN have set their sights on the rest of the world with their massive riffs, brutal breakdowns and their energetic, high-energy live show.

They’ve toured with metal titans Bullet For My Valentine in February/March 2014, co-headlined the completely sold out Monster Energy Outburn Tour with Crossfaith and Miss May I, then continued on to perform sets around the globe at the likes of Download Festival (UK) and Rock am Ring/Im Park (Germany) and performed at Japan’s major rock festivals including Summer Sonic, Rock In Japan, as well as Ozzfest Japan.

Word’s spreading about their awesomeness and Australia is next on their world domination list!

“…tonight proved just how brilliant they are in a live environment. COLDRAIN deliver massive riffs and even bigger choruses by the bucket load” – UK Scumscene

“It’s all systems go from the opening chugs of No Escape, and the quintet mark their London debut with 60 minutes of intense sonic battering” – Kerrang