Theory of a Deadman – Savages 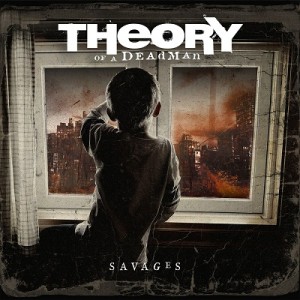 If there’s one band that unfortunately isn’t well known enough in Australia, it’s Theory of a Deadman, and what’s annoying is they should be all over the place. So it’s great to have their new album ‘Savages’ getting a run down here and fingers crossed that it leads to some airplay or god forbid a possible tour!!

Opener ‘Drown’ is a great indication of what the band is about, it’s dark, it’s groovy and it’s heavy, and as lead single it was the perfect choice. Now while you think, ‘oh great, they’re just like Nickelback or Daughtry or (insert other band name here)’ well, stop it, just stop it… how about you stop dismissing bands for what you think they may sound like and give them a shot. NOW, what I’ve always liked about Theory (that’s what we call them) is that when we head into ‘Blow’ you see that the heavier side of the band steps aside for a little bit of fun, a foot tapper, and lyrically, well you need to listen to it to get it, but when they chorus is “sometimes, it makes me want to blow my fucking head off…’ you get what they content may be about if you think about today’s society. Over the years, yes of course there is the connection with bands that these guys are friends with, it happens all the time with every band, but hey, look who’s popped up on the title track ‘Savages’ it’s Alice Cooper, and as you’d expect, we’re not worthy! This one has a hook that in a live environment will be shouted back to the stage and rightfully so. A song worthy of the naming rights to the album indeed.

Whoa, ‘Misery of Mankind’ starts off a rockin’ and keeps a rockin’ throughout, including a guitar solo that shreds nicely, and you’ll find yourself nodding along with it, but even more so when we get ‘Salt In The Wound’ which is another catchy rocker, and what I dig about Theory is they have a formula, these are 3:30 songs, they have hooks and that to me is what music needs, and Theory do it well. What they also do well is a big balladesque track and ‘Angel’ slows it down a little, but not to power ballad standards, but still nice, ooh but a song aptly named ‘Heavy’ is just that, big guitars, and what could and probably would be the perfect show opener and if the crowd isn’t going after this one, well then, they should just go home. I feel this song in particular is a big one for Theory and it rocks hard, it’s almost in the same vain as one of their other killer tracks, ‘Bad Girlfriend’ and that is AOK. What do I think about ‘Panic Room’? Hmm… lyrically, sure… it’s not about Jodie Foster put it that way, but music wise I dig it, like really dig it, these guys can arrange and write some killer riffs.

It’s time for the actual ballad, as a piano plays us in for ‘The One’ and holy shit, if you haven’t ever read my reviews before, you may not know I’m a sucker for a big ballad, and boom, thank you Theory, you’ve just added a new favourite to my repertoire. Lyrically this song hit a spot, and the fact that it stays with the single piano and strings throughout the song is a nice surprise as it actually didn’t need to bring the power to the ballad and if I was wearing a hat, it would be tipped right now, well played Theory, well played. Now, from that, I worry about this next title, ‘Livin’ My Life Like A Country Song’ which features a member of Rascal Flats, and what sucks about this song is it’s catchy as hell. An odd fit, but maybe good in the scheme of the album to break it up from what we started off with, and following the ballad was a good spot for it, and damn you Theory, I’m actually already singing along to the chorus. What I see as the issue here is, this will be a single, not the best representation of what Theory are, but hey, if it gets their name out there then I’m all for it.

‘World War Me’ turns the volume back up as you’d hope, but ‘In Ruins’ is actually close to, if not the best track on the album, this is killer, definitely a great song for this late in the album. Now, my 3:30 rule for Theory has been thrown out as the 5:20 ‘The Sun Has Set On Me’ is back to the deep and dark and brooding style of the opener, but is a cool way to go out, great arrangements here, and great tone on the guitar solo in this ‘epic’ opus of theirs, with the child choir in there, it plays out into this big chorus and I can see this being a staple in a live set allowing the musicians to show what they can do and let them just rock this one out, but this is a cool closer to a damn cool record.

Is this my favourite Theory album?… No, their 2002 debut album is outstanding, but I dig these songs, I love the big production and I think they’re going in a killer direction that might, just might get them a little better known outside of Canada and The States. If you’re listening Theory, we want you down under, we really do!

From: Vancouver, BC Canada

Track Listing:
Drown
Blow
Savages (feat. Alice Cooper)
Misery of Mankind
Salt in the Wound
Angel
Heavy
Panic Room
The One
Livin’ My Life Like a Country Song (feat. Joe Don Rooney)
World War Me
In Ruins
The Sun Has Set On Me