Save The Clock Tower 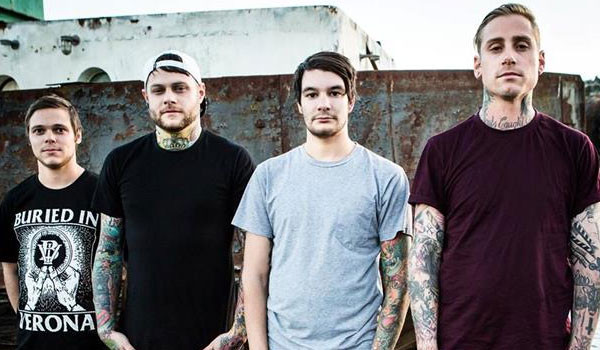 “…I think that while Tassie does have its drawbacks, for us its actually become a thing, like those dudes are from Tassie, they’re pretty good or somewhere along those lines because I think it surprises people that we’re actually from Tasmania most of the time…”

From Bio: SAVE THE CLOCK TOWER’s reputation was enhanced and a solid fanbase started to evolve across the country following the release of their two EP’s ‘Letters’ in 2011 and ‘The Human Condition’ in 2012. During this time the band has impressed fans and critics Australia wide and captured attention from American audiences and beyond. Having toured Australia on numerous occasions playing alongside such luminaries as Parkway Drive, The Amity Affliction, Dream On Dreamer, a co headline tour with Alesana in 2013, and appearances at the critically acclaimed charity event, Breath of Life Festival in Tasmania SAVE THE CLOCK TOWER are ready to stand alone as a headliner in their own right!

We had vocalist Luke Vaessen of the band fill us in on all things Save The Clock Tower, their new album, touring and what it’s like being a band from Tasmania… definitely one to watch out for!!

To start, I have to say that you guys by far have the best band name I’ve heard in ages…
*laughs* Thank you very much…

So who’s the Back To The Future fan?
All of us… our guitarist he is the one that initially came up with the name, me though I’m a huge fan of number 1 because it’s a classic, but I do love number 2 as well.

In terms of where you all hail from, has it been a hard slog being a band from Tasmania?
Yes… *laughs* yeah man, it’s really hard to get across that little bit of eater to play shows on the mainland, and I guess you also have that little bit of a stigma attached when you come from Tassie as well, but we just push through it as best we can, try and play as hard as we can and try and win new fans.

Have you ever thought about a move to the mainland?
We have, but I think that while Tassie does have its drawbacks, for us its actually become a thing, like those dudes are from Tassie, they’re pretty good or somewhere along those lines because I think it surprises people that we’re actually from Tasmania most of the time, so I think if we were to move from here it would be kind of starting again in a sense, and I think what we’ve done for ourselves here came through well enough to the mainland and the rest of Australia, at the moment anyway…

You’ve just released your debut album, what’s the feeling like when you know that it’s done and out there?
It’s a massive, massive amount of relief like obviously there’s still nerves about what people will think about it because we haven’t released any music for two years so we’re always nervous to hear what people think about it, but overall we’re just really relieved to have something out after two years like we worked on it, so a solid eight months including pre-production and tracking it was about eight months that it took to get it all done, so we’re just kind of happy that we’ve closed that chapter for the time being.

With two EP’s out previously, did you go into making the album any differently than what you’d done previously?
Well with the song writing, we really wanted to make the songs more cohesive by themselves and as a whole album I think just work on the structure of the songs. Like with the first EP the structure was all over the place and while that worked for us then I don’t think that works for us now. People want to hear some form of repetition most of the time, whether that’s the chorus that’s done two or three times, or it’s the verses with a different sounding riff but it’s still the same verse, and I think that repetition is really, really important and we really focused on getting the song structures right for ‘Wasteland’.

So can you give us one word that you feel sums it up perfectly?
Personal… *laughs* I mean like I could definitely say that it sounds aggressive or that it sounds powerful, but for each of us the album reflects a lot of what we’ve been through, especially in the last two years of getting everything ready to do this album and then to release it, it’s very personal to all of us.

So, why was ‘Wasteland’ the choice for title and what does it represent?
There’s a couple of different meanings for it, the first one and I guess probably the most obvious one is that it kind of reflects what we as humans are doing to the Earth, not to sound like all hippy and stuff, but that’s probably the most obvious one, but the main reason for me as I came up with the name is I was in a relationship for six years and it came to a pretty abrupt end, and it’s kind of how I thought about what’s left in a person after they’ve been with someone for that long and what’s left after the break up and also to do with substance abuse and alcohol abuse, what’s the hole that’s left in someone, doing those things before or afterwards.

So to get a bit of an idea of where you guys came from, who did you or do you listen to helped shape you as a band?
We all, I know it’s a very generic answer but we all listen to different stuff, but I guess the thing that we all come back to probably more so for this album and I wouldn’t say influence for the sound of the album but we all went back to listening to that kind of stuff, probably early 2000’s screamo, post hardcore type stuff like Underoath, Senses Fail, those types of bands. I know for a fact that our drummer Owen, he’s 21, he’s the youngest guy in the band, that’s how we actually met him, from him going to concerts and liking the same type of music like the rest of us, so I think probably early 2000’s screamo music.

In only four or so years as a band, what do you feel has been the biggest challenge?
I guess probably being from Tasmania, as generic as it sounds, but that’s probably the hardest thing we’ve actually found, especially with actually trying to do something with the band too, it’s fine if you just want to go and jam with your mates it doesn’t matter where you’re from, you can do whatever you want, you can go to the garage, smash out a few tunes. I think when we made the conscious decision and really wanted to try and get out so people could actually hear the music we were making, I think that the initial battle with that is getting over that little stretch of water, and also breaking into the different scenes in the different cities, that’s quite hard as well.

You were just out on tour, so for those that missed you can we expect to see you out again anytime soon?
Yeah definitely, we’ve got a few things in the works at the moment, I know we’ll be doing a few weekenders here and there, so going to play a show in Adelaide and Melbourne, so we’ll do a few of those, I know there’s two or three tours we’re looking at at the moment we’ve been offered this year and there’s one definite in February which will be nationwide.

Hard to do but can you describe a typical Save The Clock Tower show?
Just a really energetic, passionate type of performance. We do run backing tracks and all those sorts of things which I think helps us sound  as close as we can to the album and how the album sounds, but we don’t run everything through the backing tracks so it doesn’t sound like we’re not playing because we are playing, and I think we just try and move as much as we can on stage so we don’t look as though we’re standing there being bored.

Let’s say that you can open for any band in the world, who is it and why?
It’s not an easy one to answer… for me it would have to be Deftones because they are probably one of my top five bands of all time. It would be incredible even to be in the same space as that band would be amazing.

What’s the one thing you want to cross off your bucket list as part of being in this band?
We definitely want to get overseas and tour overseas, I know that we are looking at doing that as well and hopefully we’ll get around to doing that next year.

Lastly, let’s predict the remainder of the year. So finish this sentence for me, by the end of 2014, Save The Clock Tower will…
Have toured the country numerous times and that’s about it… actually I mean to tour as much as we can.