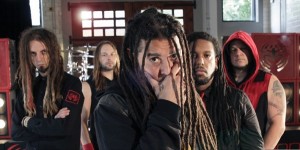 Nonpoint are set to release their eighth studio album, “The Return,” In Australia on September 29 via Metal Blade/Rocket.
After 17 years in the game, the Florida quintet sustains the same energy that sparked its foundation back in 1997. The riffs crack with intensity, the bass and drums forge an unmatched groove, and the vocals rapidly recount stories of pain and perseverance. “The Return” remains as raw, ripping, and real as these musicians—Elias Soriano [vocals], Robb Rivera [drums], Rasheed Thomas [guitar], Adam Woloszyn [bass], and B.C. Kochmit [guitar]—get.

In February 2014, Nonpoint entered Groovemaster Studios with Grammy Award-nominated producer Johnny K (Disturbed, Staind, Megadeth) and engineer Daniel Salcidoto. It marked their second collaboration together, and this time, the band had already amassed an arsenal of tight and tough material. Vocalist Elias Soriano elaborates: “I wanted to play with vocal patterns and tell longer stories in some places, while saying very little in others. The record has its own DNA because each song respectively does as well.” Drummer Robb Rivera goes on, “Johnny is like the sixth member of our band at this point! He works us, and he pulls no punches. It was such a natural thing that we only needed to track for three weeks. Johnny understands the band and what we are, and he encourages us to be ourselves.”

Elias explains the meaning behind the first single: “It’s about addiction, whether it be food, drugs, sex, lying, or anything, that tends to turn into an itch. You can’t stop scratching it so you break skin. Then, you’re bleeding. You need to get help at that point and deal with it.”

A vital energy has coursed through Nonpoint’s music since day one. As a result, they’ve sold over 800,000 albums in North America alone, yielding hits including “What A Day”, “Bullet With A Name”, and a cover of Phil Collins’ “In The Air Tonight”—which appeared in Miami Vice. They’ve also crisscrossed the country with everybody from Stone Sour, Disturbed, and Papa Roach to Sevendust, All That Remains, and Device, also appearing at festivals including OZZfest, Rock on the Range, and Summerfest.

Ultimately, Nonpoint once again delivers a cohesive collection of powerful songs. “I want everybody to feel like they got a complete record from beginning to end,” concludes Elias. “I want them to walk away with something substantial and true that they can hopefully come back to.”

Robb leaves off, “Nonpoint has always been known for writing songs that help people. If we can help even one person feel better about his or her day, we’ve done well, as far as I’m concerned. I hope everybody gets something positive and can walk away with a smile.”

Then they’ll return for more!