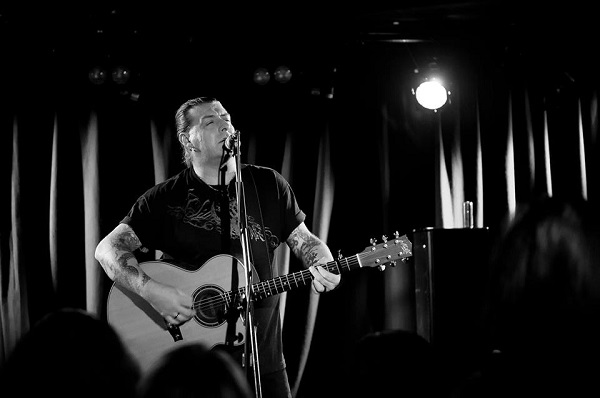 From press release: As the founding member and bassist of aussie rock icons The Screaming Jets, Paul has penned songs that have become part of the nation’s psyche over the past two decades. Creating hit tracks such as Helping Hand and October Grey, Paul is easily recognised by his sweet basslines and his incredible harmonies.

Now, for the first time, this talented musician has stepped away from his key role in The Screaming Jets to release his debut solo album – Bombido – an offering that is guaranteed to delight all music fans.

We chatted to Paul Woseen about his debut solo album, his song writing and touring as well as an update on the next Screaming Jets album…

You released your debut solo album late last year, after so many years in The Screaming Jets, why was now the right time to release a solo album?
There’s no rhyme or reason really behind it, mate, I just had some down time, Gleeso our singer was pushing me a long a bit telling me, ‘come on, you should do it, it’s about time you did it’ and I’m a bit of a procrastinator and I’ve been going to do it for years, and just finally decided to do it.

Tell us about the title ‘Bombido’ and what it represents to you…
It’s a seventies drug slang word that I came across on a troll through the internet and I just liked the sound of it. To me it sounded like something acoustic, something Spanish and that’s why I liked it.

The album features some great acoustic re workings of Jets tracks, what was it like for you playing these like this for the album?
Well it’s how I wrote them so there’s not too many degrees of separation between the versions, like the versions that I’ve recorded on ‘Bombdio’ are pretty much the versions they were to begin with.

So they were changed up as we know them in The Screaming jets and these are more like the original versions?
Yeah there’s really not that much difference between these versions and The Jets versions except all the boom crash and the screaming guitars.

For your originals, what inspires you these days musically?
Same sort of thing, just what I see around me, what I hear around me, what I’m going through, what mates and friends are going through. I’m one of those crazy looking dudes that carries around a pad and pen everywhere they go and just jot down things I hear and see, that’s where I get my inspiration from. One of these days I might sit down and try and write a song about a subject, but I’ve never really attempted that, so I don’t know…

You’ve been out doing some acoustic shows in support of the release, how have they been going?
They’ve been going pretty well, not pulling huge numbers, but the people that are coming are very receptive and enjoying the shows, and a lot of interaction with people asking and it’s almost like a singer songwriter night, people ask me a question about the song before I play it or after I play it and it’s cool. It’s been great.

You’ve got a couple of shows left on the run in NSW, so for those that haven’t been along, what can we expect to see at one of your shows?
There’s a bit of everything, I play some tracks off ‘Bombido’ and I play a few new songs that I’m road testing for a new Jets record, and depending on my mood on the night I might pull out a favourite cover.

Is it somewhat daunting stepping out to be the front man?
Nah… I think I’ve always been a largish figure in The Jets show anyway with my harmonies and stuff, and I’ve never shyed away from the frontline or the backline, it doesn’t bother me at all.

You’ve always been playing with Rose Tattoo for a while too…
Yeah I’ve been doing some Tatts shows which has just been awesome.

So there’s no real downtime for you then it seems?
Idle hands… I’m my own worst enemy, if I’ve got time on my hands I’ll get up to no good.

Do you have to get into a different mindset taking on vocals rather than just playing bass?
Yeah it is a bit of a different mindset, I have to sort of become the person that is singing the song if that makes any sense, even though I wrote them and I’ve had Dave sing them, now I’ve got sort of go through what he does before each song he becomes the person of that song if that makes any sense.

Do you have a favourite song you’ve written?
No I don’t know… ‘October Grey’ I love, then a song I wrote with Dave called ‘Disappear’ another song called ‘Other Side’ is probably one of my favourites.

I was reading too that you’ve written upwards of thirty of The Jets songs too…
Yeah, most of the Jets stuff was written by either me or by Grant.

What’s the status of The Screaming Jets at the moment? Any plans for new music soon?
Well July / August we plan to go in and record a new album and have that ready for a tour starting in October. No mucking around.

Lastly, let’s predict the remainder of the year so if you could finish this sentence for me, by the end of 2014, Paul Woseen will…
Be in the middle of a tour with The Jets rocking his socks off.

Catch Paul Woseen on the last of his two solo show dates at the following venues: