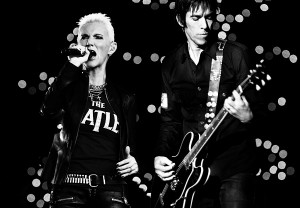 IT MUST HAVE BEEN LOVE – ROXETTE RETURNING TO AUSTRALIA IN 2015

Live Nation is excited to announce that legendary Swedish pop-rockers ROXETTE are returning to Australia for a national tour in summer 2015.

After the 2011-2012 World Tour that took them around the globe twice over, playing to more than 1.5 million people in 46 countries including our very own shores, Roxette – Marie Fredriksson and Per Gessle – are ready to do it all again with the Aussie leg of their world tour kicking off in February, joined on all shows by special guests Boom Crash Opera.

Tickets for all shows on sale 9am Tuesday May 27.

My Live Nation members can be amongst the first to secure tickets during the pre-sale beginning 10am Wednesday May 21. Sign up at www.livenation.com.au

Roxette will begin their Australian tour in Brisbane on February 10 before heading onto Adelaide, Perth, Melbourne, Wollongong and Sydney. The band also play two very special A Day On The Green winery concerts in the Hunter Valley NSW and Yarra Valley VIC.

“We are beyond thrilled to head back to Australia, a stunning country with beautiful fans who have remained some of our most loyal supporters over the last 25 years,” says Per Gessle. “Marie, the band and I are ready and raring to go with a brand new show full of our best hits and a few surprises”.

One of Sweden’s finest exports, Roxette have a string of much loved hits under their belt including Listen To Your Heart, The Look, How Do You Do, Spending My Time, Joyride, Dangerous, Sleeping In My Car, Dressed For Success, It Must Have Been Love, Almost Unreal and many, many more.

Arguably one of the world’s most successful power-pop duos, Roxette this year celebrate the 25th anniversary of their juggernaut hit single The Look reaching #1 on the Billboard US Chart in 1989. This track kicked off one of music’slongest-running pop careers with the duo selling more than 75 million albums worldwide to date. The band topped the Australian singles charts three-times with smash hits It Must Have Been Love, Joyride and The Look, with five of their albums reaching the Top 10 on the Australian album charts.

The band’s come-back began in 2011 with the release of hit single She’s Got Nothing On (But The Radio) lifted from the album “Charm School”. This, along with their sellout 2011-2012 World Tour, cemented the fact that Roxette were back bigger than ever, much to the joy of fans worldwide.

Roxette’s 2012 tour was a triumphant success, with the first arena shows selling out instantly, extra dates added and rave reviews from fans and media alike. “Unless you’d seen it for yourself, you can’t imagine the mass frenzy the return of Roxette caused,” said the Herald Sun. “Roxette’s is a back catalogue to die for,” said Life Music Media, while Tone Deaf raved “Every hit gets a big rock ending, every ballad sees several hundred lighters aloft and we love every moment of this trip back to the 90s.”

Supporting Roxette on tour are Aussie rockers BOOM CRASH OPERA, renowned for their high energy live shows that bring audiences to their feet. The band’s hits from the 80s and 90s are well-loved to this day and include Onion Skin, The Best Thing, Hands Up In The Air and Dancing In The Storm. Dale Ryder (lead vocals) will be accompanied by Peter Farnan (guitar/vocals), Greg O’Connor (keyboards/guitar), Peter Maslen (drums/vocals) and Ian Tilley (bass/vocals).

And so the Roxette joyride continues with their World Tour hitting Australian shores in 2015. Listen to your heart and come join it!

TICKETS FOR ALL SHOWS ON SALE 9AM TUESDAY MAY 27

News Limited pre-sale offer: 10am Monday May 19 until 5pm Tuesday May 20

My Live Nation Members’ pre-sale: 10am Wednesday May 21 until 5pm Thursday May 22