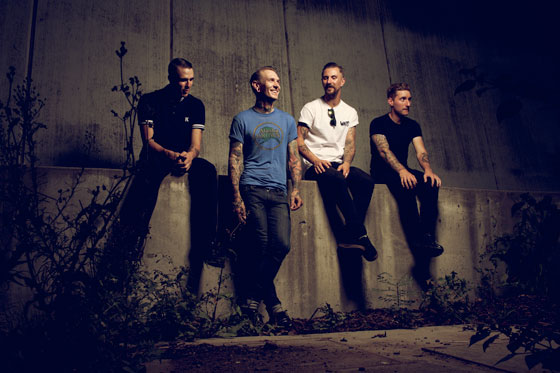 “The band wanted to capture our live sound and energy as best we could. So we piled in to the neve’ room at Sing Sing Studios and went for it. It was one hell of an experience for us all. Definitely the most challenging thing we have ever done as a band yet we are so happy with the outcome.”

From Bio: Since their birth in late 2011 My Echo have continued on their persistent climb up the mountain that is the Australian Music scene. Ramming sweaty rooms around the country on the back of releases ‘The New Approach’ EP and digital single ‘Do or Die’ as well as numerous supports for the likes of Aussie long players such as Bodyjar, Shihad, Trial Kennedy and King Cannons the band headed in to 2014 off the back of their newest release ‘My Echo’ EP.

We love the sound of My Echo, so they were easily a pick for one of our Best Things You’ve Never Heard. We had Darcy answer some questions for us all about the band, so check them out ASAP!

Let’s start with the basics; for those that aren’t aware of you, can you please give us the abridged version of the My Echo story, how you all came to be and the decision on the name of the band?
Brenton, Tom and myself all grew up in the same town. Brenton and I met Tom when he was like 13 and would come and watch one of our old bands. Here we are a decade later playing in the same band. Henry also played in an older band with Brenton and myself. He is just really bloody good so we begged him to play in My Echo!

The name itself comes from a track title from a Rival School’s album.

Can you now please introduce each band member including yourself, and give us a rock ‘n’ roll fact or myth about each of you?
Brenton Perry – Vocals and guitar. He once tried to run up a wall at a certain Brisbane venue. He ended up getting stuck in a window that was hidden by a poster.

Henry Hollingsworth – Drums. Henry has the incredible ability to become completely naked in an instant. Look out taxi drivers!!

Darcy Carter – Guitars and vocals. I have the longest torso in the Australian music scene!

You have just released your new self-titled EP, so instead of giving us a standard review, let’s say if you had to give us your best door to door sales pitch to try and convince someone to listen to it before they slam the door in your face, what do you say to them?
I don’t think I would really have to say much. They would just look at the poor, skinny looking weird dude at the door and hand over money in sympathy!

With your previous EP out in 2011, did you set out to do anything differently this time around compared to what you did with ‘The New Approach’?
We actually decided to record live to tape on this recording. The band wanted to capture our live sound and energy as best we could. So we piled in to the neve’ room at Sing Sing Studios and went for it. It was one hell of an experience for us all. Definitely the most challenging thing we have ever done as a band yet we are so happy with the outcome.

Lyrically and musically, currently what or who inspires/influences your music the most?
There is so much incredible music coming out lately that it is incredibly easy to become inspired. One act that we are all hooked on is Justin Townes Earle. That guy knows how to tell a story backed by amazingly simple songs. Locally, new records from Luca Brasi and Ceres have been fantastic!

On the other side of that, what bands did you grow up listening to and how did they help create the style of music that can now be heard throughout your music?
We all grew up listening to punk rock. Some of us are older than others, but it is always present. From bands like The Clash and The Ramones to the 90s punk scene bands like Pennywise, Unwritten Law and Nofx. Those bands are the ones that made us all pick up and respective instruments and start bands.

In terms of touring, you’re about to head out for some shows in support of the EP, so if you can, how would you describe a typical My Echo live show?
Beers, rock’n’roll, dancing and more beers!!

For a bit of fun, say you get the chance to open for any artist or band in the world, who would they be and why?
Well our label Tentotwo Records just put out the new Chuck Ragan record here in Australia. Chuck also plays in one of our all time favourite bands Hot Water Music. That would be pretty special!

If you could cover one song in your live set that no one would ever expect, what would it be and why?
‘Travelin Soldier’ by The Dixie Chicks has been thrown around a few times. Yeah we know! But they are incredibly talented and the song is just a cracker!

What kind of movie do you think your music would be best suited to and why?
Maybe Two Hands if it hadn’t been made already. We just love that movie.

Lastly, with 2014 well underway, here’s a chance to gaze into your crystal ball and see the future.  So, by the end of 2014, My Echo will:
1. Touring the festival circuit
2. Preparing for the release of debut album
3. All sporting rather impressive beer guts!

With special guests – Tickets on sale