Mark O’Connell of Taking Back Sunday 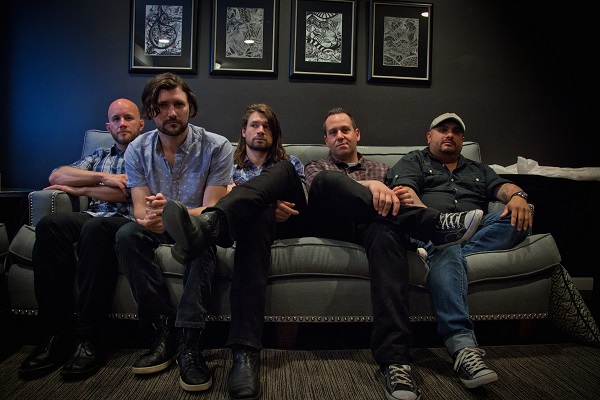 “…The thing is, we didn’t come up with the title because of this, but at the same time personally the relationships within the band are the best they’ve ever been throughout the fifteen years of being a band, so it made perfect sense when he said it.”

From Tour Release:  Selling millions of albums worldwide, TAKING BACK SUNDAY continue to deliver successful releases such as Tell Your Friends, Louder Now, New Again and latest sixth full-length release, Happiness Is. Happiness Is showcases a new musical and conceptual leap for a band of mainstream misfits.

We caught up with Mark of Taking Back Sunday to talk us through their upcoming Australian tour with The Used as well as an insight into their newest album ‘Happiness Is.’

You’re heading back to Australia this time with The Used and a new album under your belt. What can fans expect from a Taking Back Sunday set circa 2014?
You can expect a lot of energy, because we care about what we do and we want everybody to enjoy the show.

You’ve been out with them in the US, and both bands are so energetic and a perfect pairing in my opinion, do you guys try and out show each other every night?
Well you know there’s always that thing you always want to play the best you possibly can and we always want to give it our all, and it’s not about that, I mean there’s always competition when bands play together, but for the most part those dudes are just good dudes, we enjoy hanging out with them and enjoy playing shows with them, they’re nice guys. So it’s not about showing each other up, it’s about putting on a good show, and that’s the thing, all the kids that were coming out to those shows were having a good time you know…

Well when you have powerful front men like Adam and Bert out there, you know you’re in for a good show…
Adam is good at what he does, that’s for sure. We are lucky to have a front man as good as he is.

Last time you were here, Adam’s leg was well and truly busted and he was sitting for 90% of the set, but the show was still so unbelievable, is playing live just what empowers you guys to produce such a good live show?
Yeah like when we started, I was eighteen when I joined Taking Back Sunday and when we started and it was us five, Me, John, Shaun, Eddie and Adam I knew that I had finally found four other guys that cared about being in a band as much as I did, because that’s not an easy thing to find. Growing up and being in high school I was always trying to start bands as I knew what this is what I wanted to do, so when people wouldn’t show up to practice or they didn’t care, I just didn’t understand, I was saying ‘Why don’t you care as much as I care?’ and I never got it, so yeah, when I joined Taking Back Sunday I finally found the right guys, I found the guys that will drop everything to do what we do.

So do you have a favourite memory of a previous tour down here you can share with us
Hmm… well, man, you know it’s hard to say because Australia is a nice country and I think my best memory is just realising that I’m in a band that’s able to go to Australia and play and people are going to care. That’s my first thing that comes up with Australia, and just having that, and it’s a beautiful country you know.

‘Happiness Is’ is the new album, your second with the ‘classic’ line-up of the band, has everything gotten completely back into the groove again after the last album where you’d only been back together for a short amount of time?
Yeah, it had been a really long time and the thing is when we got together, we didn’t do much touring, we didn’t have much time, basically we got together and wrote an album immediately and then with this last album we had two years to feel the songs out and write the songs and it was kind of more like writing ‘Tell All Your Friends’ because we had so much time to write all the songs we had then, and then now this time with ‘Happiness Is’ we also had a very long period to where we could write these songs, so it wasn’t just like ‘ok, sit down and write an album’ it was like over the two years that we had it was just here’s songs… you see what I’m getting at?

And you can tell because this new album flows so well, it was almost like the first one was put together because you almost had to, and with this one as you said with time to do it did you set out to or want to do anything differently this time around?
I think with this album we didn’t say ‘hey we’re going to go for this on this song’ or ‘we’re gonna try this genre’ we just said we’re going to do whatever we want to do and that’s it and if a song turns out the way it turns out, if it’s a slower song or a faster song there wasn’t any ‘no we can’t do that’ it was all just  this is what sounds best to us and this is what we’re gonna go with.

You say that and you have a song like ‘Nothing At All’ which stood out for me as a completely different Taking Back Sunday was that something you were a bit hesitant to do?
That’s a funny song because I came up with the music for that song, and when I first wrote it, it was a faster punkier sounding song but I wasn’t liking the way it was coming out, so I was working on it and working on it and working on it and I was sitting on my balcony with my guitar and I kind of felt defeated and I was playing it very, very slow, just strumming the chords I had and I thought ‘oh man I think I’ve got something with playing it like this’. So then I took it to John and said hey I recorded this, check this out and he was into it and then just started putting the extra little bit of music on it and we kind of just went with it.

The title of the album, I have to ask, ‘Happiness Is’ well, what is happiness to you?
Happiness to me is family, I got a wife I got a kid and coming home from tour and seeing them and just hanging out with them and being a dad and a husband and that’s what happiness to me is. I think if you asked everybody in the band I think they’d say the exact same thing.

So how did the title come about as it seems like an open statement to leave it to your own interpretation as to what happiness is?
We were throwing around a bunch of things and Adam called all of us and said ‘I have this idea, ‘Happiness Is’ what do you all think?’ and everybody, it was kind of just immediate, everybody said yeah let’s do it. The thing is, we didn’t come up with the title because of this, but at the same time personally the relationships within the band are the best they’ve ever been throughout the fifteen years of being a band, so it made perfect sense when he said it.

So do you think that the little split with a couple of the guys and getting back together was what you guys needed to re-energize the band?
Yeah definitely, before John and Shaun came back I had checked out, mentally I was just done and that was the thing, Shaun and I have been, our group of friends have been best friends since we were five or six years old, so I still hung out with Shaun all the time, he’s still one of my best friends, so John Nolan was actually doing a solo tour and it was starting off in Long Island, and Shaun was like ‘Yo, wanna go hang out with John? He’s coming…’ so we all three went out one night and I was like ‘I just can’t be in this band anymore’ and to Shaun I was like what about this idea, do you think John would be down with it? No one thought he would and when I talked to him he was, so yeah, having John and Shaun back, if they weren’t back we would be done for sure, 100%…

Now you talked about you writing music for the songs, do you guys all work on different parts and bring them in to each other and build the songs that way?
Yeah, it’s like writing is five guys, it’s cool because one guy will have a guitar part, like I’ll come up with a guitar part of Eddie will come up with a guitar part a lot of the times and then everybody has something to say you know what I mean? Everybody has their strong points and everybody knows what they’re good at. So John and Adam are the lyric guys, but they add to the music too, so to answer your question, yes, everybody adds to the writing.

OK, so the year is well underway, so let’s predict the rest of it… finish this sentence for me, by the end of 2014, Taking Back Sunday will…
Hmm… tour more countries than we’ve ever toured before. The goal is to go to as many places and reach out to as many people as we can.

I did just see you were added to Riot Fest which is an absolutely insane line up…
Yeah dude, being a part of that is amazing, I mean Slayer is playing, there’s a band that I really like called Red City Radio, they’re playing… it’s such a crazy line-up and I’m really excited to be a part of it.

I’m half tempted to get on a plane and come over for it…
You know, I was thinking, you know how Coachella is like the hipster thing here where all the bands are playing and it’s like the festival and you’re a band and you get on that it’s like the big thing you know, but I kinda don’t really give a shit about that, like being a part of this, the Riot Fest is really cool for me and I can’t wait to do it.

Well firstly we’ll see you down here in August, it’ll be one hell of a show…
Yeah man, I can’t wait to go, I’m super excited.

Latest release: Happiness Is… – (Out Now – Hopeless Records) – Check out our review HERE

Catch Taking Back Sunday on tour in Australia with The Used at the following dates: