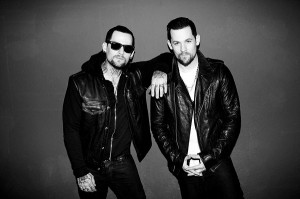 Global music stars Joel and Benji Madden — known for their band Good Charlotte as well as appearing on Australia’s highly rated The Voice on the Nine Network — have announced that they have formed a new band The Madden Brothers. Their debut album entitled Greetings From California…, is set for release on Capitol Records via EMI Music Australia October 3rd.

The first single “We Are Done,” a soulful, ’60s-inspired tune that they wrote with highly acclaimed producer Eric Valentine, will be released June 2 alongside a lyric video.

Having already earned a place in history with Good Charlotte’s radio-ready pop-punk sound captured on such albums as their 3x US platinum (2 x Platinum in Australia) breakthrough The Young and the Hopeless and over 10 million combined sales from their 5 albums sold worldwide, Joel and Benji were eager to flex their creative muscles with an entirely new project. “The idea was to not hide behind a band name or a genre, but rather to write some songs, and find someone to record them and help us deliver the truest picture of who we are musically,” Benji says. The result is Greetings From California…, which showcases the Maddens’ killer knack for melody, radiant sibling harmonies, and heartfelt story-telling.

THE MADDEN BROTHERS – DEBUT ALBUM – GREETINGS FROM CALIFORNIA… – OUT OCTOBER 3