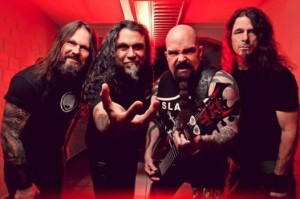 At the Revolver Golden Gods Awards held at the Nokia Theatre in Los Angeles,SLAYER surprised the capacity crowd with an unannounced performance, kicking off the show with a three-song set that included the global premiere of “Implode,” the band’s first new studio recording in five years.

Recorded earlier this month at Henson Studios in Los Angeles and produced by Terry Date and co-produced by Greg Fidelman, “Implode” is now available as a free download as a “thank you” to the band’s fans for their continued support.  Or, as Kerry King put it, “you have been waiting for us, now we are delivering for you.”  Registered members of SLAYER’s fan club were sent an email right around midnight giving them the link to the song and a chance to hear it before it was made public. “Implode” can now be downloaded at www.slayer.net.

Later this year, the two-time Grammy-winning SLAYER will begin recording a new album, tentatively set for an early 2015 release date.  The album will make SLAYER history as it will be released on Nuclear Blast Records through the band’s own label imprint, closing out a 28-year relationship with Rick Rubin and American Recordings.  No name for the imprint has been decided on yet.

“Rick has played a huge role in our career, we’ve made some great albums with him,” said SLAYER’s Tom Araya.  “But today is a new day, record companies don’t play the kind of role they once did, and we really like the idea of going out on our own, connecting directly with our fans, and Nuclear Blast is fired up about taking on that challenge with us.”

All future recordings on the band’s label imprint will be released worldwide exclusively through Nuclear Blast.

“I was a teenage rebel when ‘Show No Mercy’ came out,” said Markus Staiger, owner of Nuclear Blast, “and I identified with that record.  It was the most extreme, aggressive thing at the time. They were then and still are the most brutal metal band on the planet!  I really cannot express how proud I am that we are able to work with SLAYER to join the Nuclear Blast family. We are ready for that next record and, I’m sure it will go into metal history!”

Added Nuclear Blast label manager Gerardo Martinez, “The prospect of helping SLAYER take a leading role in the creative process surrounding their releases, projects and other cross-promotional opportunities is the ultimate honor for me, a metalhead who grew up in Los Angeles listening to SLAYER.  Nowhere in my wildest dreams would I have imagined that Nuclear Blast would be making history alongside one of the best bands in metal.”

SLAYER – Tom Araya/vocals, bass, Kerry King/guitar, drummer Paul Bostaph, and Gary Holt who continues to stand in for the band’s founding guitarist Jeff Hanneman – will spend the next few months on the road touring major North American and European festivals as well as headlining dates, sharing the stages with Metallica, Iron Maiden and more (see below), but is expected to be back in the studio in the fall to record the rest of the new album.

Stay connected to www.slayer.net for all the updates.

The Chicago Tribune‘s Greg Kot wrote that the five-time-nominated, two-time Grammy winning SLAYER is “one of the great American rock bands of the last 30 years, forget about genre.”  Their membership in “The Big Four” – Metallica, Slayer, Megadeth and Anthrax – the four bands that defined the thrash/metal genre – secures their place in music history.  Indeed, few bands come close to matching the intensity that Slayer brings to its live shows, having been named “Best Live Band” by numerous media outlets including Revolver, SPIN, and Metal Hammer.  With songs that mirror the turmoil and aberrations of our society – God’s terrifying global genocide, the chaos of our broken political system, chemical warfare, the hideous minds of serial killers, and the way-too-close proximity of world horrors that technology has brought us – SLAYER remains crushing and brutal, steadfastly refusing to cater to the Mainstream.

Independently owned for 27 years and counting, Nuclear Blast Records is synonymous with the worldwide advancement of heavy metal, extreme music, and hard rock.  Founded in Donzdorf, Germany in 1987 by Markus Staiger, Nuclear Blast boasts a roster of over 100 bands representing eighteen countries.