Devin Shidaker of The Acacia Strain 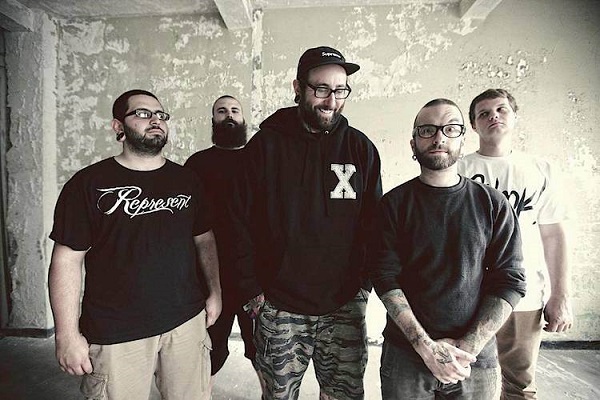 “We take the songs that we have played in the past that do really well, we usually put those in there and then we just take depending on what type of crowd we’re playing for, with more metal shows we try to get some of our most faster paced stuff in there and then if we’re playing more of a hardcore type set then it’s more of our heavy stuff.”

From tour release: The Acacia Strain are heading back to Australia this autumn to demonstrate their bone crushing rhythms, apocalyptic samples and triple guitar assault that combined, delivers their signature blend of hardcore, death and doom. Armed with two new members and  lyrics centred around misanthropy and nihilism, with some misogyny and sexual deviance thrown in for good measure, you know a night with these guys is most definitely going to be completely Heavy!

Before heading to Australia, we caught up with Devin of The Acacia Strain to discuss the upcoming tour as well as new music and more…

Thanks for your time today, Devin, no of course you’re headed to Australia this month, what can people expect on this tour?
This time around really loud music and hopefully a lot of energy, we haven’t toured in a while and especially haven’t been to Australia in a long time.

With six albums and a couple of EP’s what’s the process of putting a set list together these days?
We take the songs that we have played in the past that do really well, we usually put those in there and then we just take depending on what type of crowd we’re playing for, with more metal shows we try to get some of our most faster paced stuff in there and then if we’re playing more of a hardcore type set then it’s more of our heavy stuff.

Using only two words, how would you describe a typical Acacia Strain show?
Hmm… loud and violent.

Have you been to Australia before?
I have not, the band has, but I’ve been in the band for about a year now…

Have the guys that have been here given you any idea of what to expect?
Yeah, I mean everyone says that Perth is real weird because it’s not close to anything. The food is pretty expensive compared to over here, that the shows are always just insanity, people over there enjoy going to shows and doing all that stuff. In America people are kind of picky, they’ll be like ‘I saw them two years ago, I don’t need to go again’ but over there you don’t know when a band is going to come back, so you go to the show and you see them.

With the Above / Below EP out last year, from your understanding, what was the concept behind the two tracks?
From a lyrical standpoint, on the cover you see there’s a vulture and a rat, and above there’s a vulture and how there’s always a threat above you and the rats are kind of below. Basically you’re not safe anywhere… at least that’s my take on it, but I didn’t write the lyrics, so I can’t really say for sure what’s going on in Vincent’s head.

Has the band been writing and can we expect a new album anytime soon?
Yeah we actually have about a week left and we’re done with this new album. We’re looking to put the album out sometime this summer, but besides that we don’t have anything set to release.

After only playing on the EP before, what was it like getting into the studio and making an album with the band?
It was great, it wasn’t like stuff that I’d recorded in the past it was easier and it flowed a lot better when we sat down to write everything, everything just poured out, there was no writers block or anything, or anyone just saying ‘I guess that’s good enough. We’re all just really pumped about these songs.

You and Richard only joined the band last year as you mentioned, did it take a little while to find your footing?
Not really, my old band toured with The Acacia Strain a couple of times before, and we were all friends before so there was no adjustment period as we knew each other from before, so it worked out.

So how did it come about that you eventuated to be in the band?
Well my old band like I said, we toured with them and we weren’t touring enough and I just couldn’t afford to stay with a band that wasn’t going out, we weren’t making any money and I don’t want that to be the main thing about why I do music, but I can’t stay on the road if I can’t pay my bills, so I decided to leave my last band and The Acacia Strain was looking for somebody and I just jumped on it, because we’re friends and they have a constant touring schedule.

So stepping in where Daniel was who had been there from the start, did you feel there were some big shoes to fill?
A lot of my friends told me they were big shoes to fill, but it’s a band that I’ve listened to since their first major album and they’ve been such a major influence on my writing that it wasn’t really difficult to know how the band should sound when we write good music. I thought that if I psych myself out on how big the shoes they are I have to fill then I’m gonna write something that’s shit.

What do you enjoy about being part of the band?
Probably the friendship, I mean everybody gets a long really well, I mean it runs like a business but you just hang out with your friends which is like the best kind of job really, nobody really gets on anybody’s nerves.

Let’s predict the future… Finish this sentence, in 2014, The Acacia Strain will…
Tour as much as possible. I hope it comes true…

Latest Release: Above / Below (EP – Out Now)

Catch The Acacia Strain on tour in Australia at the following dates: 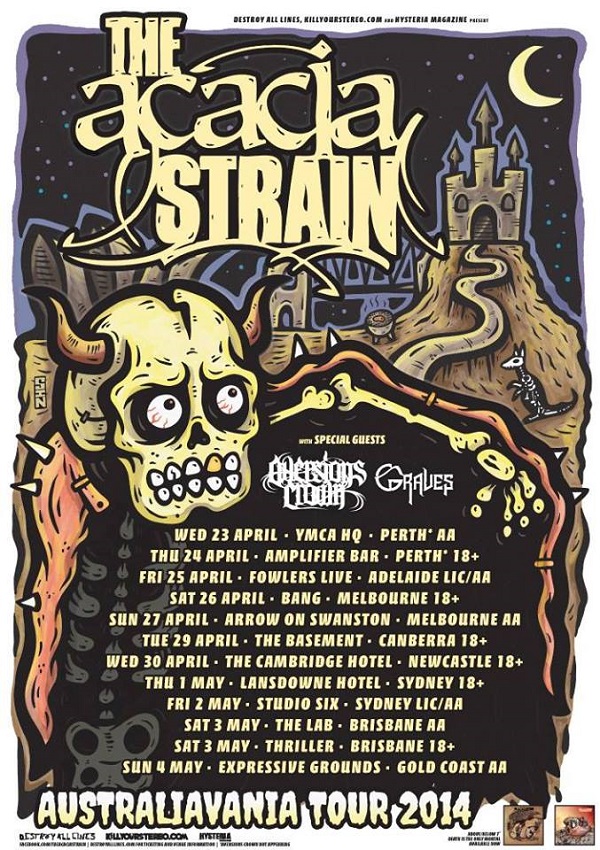