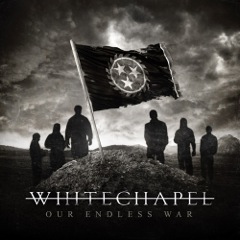 Returning with the fifth full-length of their decimating career, there is no stopping the juggernaut that is WHITECHAPEL. Our Endless War is the culmination of everything the Knoxville, Tennessee sextet have worked toward since their inception. A ruthlessly honed album that refuses to compromise on brutality, it is also by far their most streamlined, atmospheric, and emotionally powerful release, pushing every aspect of their sound to the next level.

Our Endless War will be released April 25th in Europe via Metal Blade Records. TodayWHITECHAPEL have revealed the album artwork track listing and have released the first single from the new album. Listen to the first offering from Our Endless War and pre-order the album, in exclusive bundle packages at http://www.metalblade.com/whitechapel. “We are excited to announce our fifth full length studio album Our Endless War. In typical WHITECHAPEL fashion, this CD takes the sound we have been developing over the past 8 years of our career and pushes it to new levels. We want each record we release to sound different, and this one is no exception. With dashes of every record we have done so far mixed with the intensity of a new sound, this record is sure to please fans of WHITECHAPEL, old and new”, says guitarist Alex Wade.

Having progressed with every record, on Whitechapel the band took a stylistic leap forward, garnering a whole army of new fans and greater critical respect in the process. This determination is immediately apparent. Having started to “seriously” write in February of 2013, the album was a year in the making, the band letting the writing develop organically while putting everything under a microscope, working harder on perfecting every song than they ever had before.

Famed for their three-guitar lineup, the band have always packed a crushing sonic punch, but onOur Endless War they take greater advantage of this than previously. Frequently, the seven-stringers build dramatic, incredibly heavy walls of thrilling noise through interweaving their parts, making for a sonic richness that pulls listeners even further into the songs. As with all ofWHITECHAPEL’s releases the heaviness does not just stem from the music but Bozeman’s lyrics, showing characteristic diversity across the record’s ten tracks.

When it came to tracking the album the band considered no one beyond Mark Lewis, who helmed Whitechapel. “Making the self-titled record went so well, we loved the way it came out, our label loved the way it came out, and our fans kept telling us that it was our best sounding record so it would have been stupid not to work with him again!” laughs guitarist Alex Wade. For the artwork, the band turned again to Aaron Marsh, who supplied WHITECHAPEL with its stark, arresting imagery, but again they wanted to push things to the next level. “With the sound maturing we felt like the artwork needed to reflect that. We also introduced a new logo – our old logo is classic Whitechapel, and that’s not something we plan on getting rid of, but as the band grows and changes we felt like we needed the logo to represent the maturity of this newWhitechapel.”