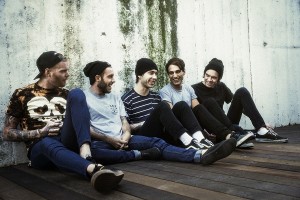 Since their first show in June 2013, Hellions have wasted little time in establishing themselves as one of the country’s freshest sounding, heavy acts. Drawing comparison to artists as diverse as Stray From The Path, Defeater, Rage Against The Machine and A Day To Remember, the Sydney-based collective made an instant splash with the release of their first single, “Infamita,”which featured the vocal talents of Northlane’s Adrian Fitipaldes, while quickly racking up tour supports with Emmure, Deez Nuts and Attila. September 2013 saw the five-piece unleash their debut, Die Young. Its blend of aggressive, hardcore-influenced guitar work, punk rock melodicism, frenzied percussion and the unique delivery of frontman, Dre Faivre, all combining to form a sound and style that the band can proudly call their own.

With Die Young landing at #49 on the ARIA charts (and #10 for Australian releases), Hellions went on to headline a series of successful album launches before warming the stage for Buffalo bruisers, Every Time I Die. 2013 was rounded out with an expansive national trek with Dream On Dreamer, A Skylit Drive and No Bragging Rights, before joining Parkway Drive, Millencolin, The Used and The Amity Affliction (amongst others) on the Sydney leg of the Vans Warped Tour. Hellions also took out the “Best Newcomer” title in the fan-voted, Blunt Readers Poll.

2014 has already gotten off to a busy start, as the tireless group spent a month performing throughout Australia’s often-­forgotten regional centres on the Skydancer tour, alongside label mates In Hearts Wake and Hand Of Mercy. Captured in the heat of the Australian summer, the video for ’22’ – and the ‘We Are The Wild Ones’ tour dates – will bring the Die Young cycle to a close, before Hellions go into lockdown to record their heavily anticipated follow up, which will see a release through UNFD before the year’s end.

Joining Hellions across all dates will be highly touted punk troupe, Trophy Eyes. Since forming in early 2013, these Novocastrians have quickly left their mark on an unsuspecting public, with their Everything Goes Away release instantly connecting with kids across the country. Powered by vocalist John Floreani’s deeply personal lyrics, the young outfit have created enough of an impression to land the national support slot with UK pop-punks Neck Deep, as well as opening the Sydney leg of the recently concluded Soundwave Festival, with their debut full-length set for a release in the latter part of 2014.

HELLIONS
WE ARE THE WILD ONES TOUR
with guests TROPHY EYES