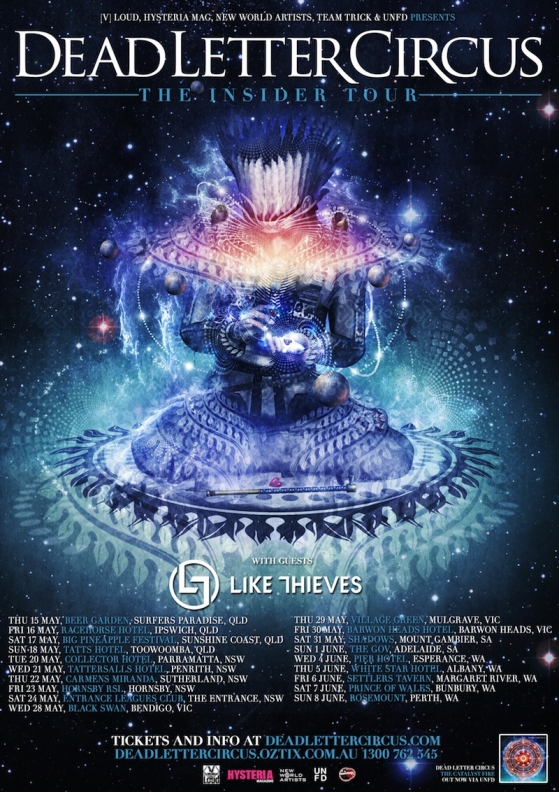 Dead Letter Circus are pleased to announce The Insider Tour, with 19 shows sweeping across all points of regional Australia. After spending January co-headlining capital city dates with old friends Karnivool, Dead Letter Circus can’t wait to get back in the van and take their high impact, powerfully emotive performances to their loyal regional fans.

‘Insider’ is the latest single off the band’s sophomore album, The Catalyst Fire, which debuted at number 2 on the ARIA charts and was a triple j Feature Album.
Vocalist Kim Benzie described ‘Insider’ as “That song you recognize from the first beat. Spacious and massively epic. We love playing this live.”

The band has criss-crossed the globe over the past 3 years, catapulting them to the forefront of the alternative-progressive rock world. The Insider Tour will see Dead Letter Circus bring Brisbane mates Like Thieves along for the ride, and they’ll be joined by hand-picked local supports. Tickets are sure to sell out fast, don’t miss out.

Tuesday 20th May 2014
Collector Hotel
100 George St, Parramatta, NSW
w/ Like Thieves and Self Is A Seed

Wednesday 21st May 2014
Tattersalls Hotel
Station St, Penrith, NSW
w/ Like Thieves and Self Is A Seed

Thursday 22nd May 2014
Carmens Miranda
590 Kingsway, Miranda, Sutherland, NSW
w/ Like Thieves and Self Is A Seed

Saturday 24th May 2014
Entrance Leagues Club
3 Bay Village Rd, Bateau Bay, The Entrance, NSW
w/ Like Thieves and Self Is A Seed

For supports, venue and ticket information, head to:
deadlettercircus.oztix.com.au