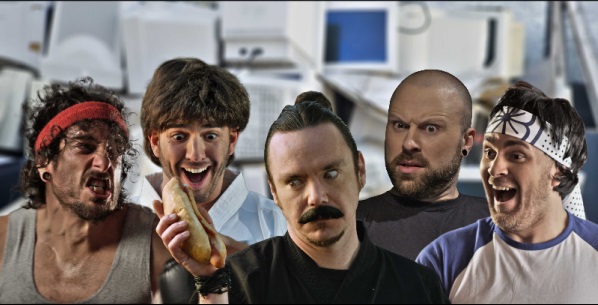 Twelve Foot Ninja has premiered the long-awaited music video for the song Ain’t That A Bitch. With the promise to create an action-packed and gory tale of retribution against an internet troll, the Australian group turned to fans in an effort to crowd fund over $45,000 for the making of the video. As a result, Twelve Foot Ninja broke a world record, successfully crowd funding the most ambitious financial target for a music video or short film.

The band pulled out all of the stops for their highly anticipated video, calling on a prosthetics make-up artist who worked on the film The Hobbit, a 7ft Alaskan brown bear and Penthouse Magazine “Pet” Madison Rhys. Also appearing in the video are members of American metal band Periphery, who became good friends and strong supporters of Twelve Foot Ninja after playing a show together in Melbourne back in 2012. While Twelve Foot Ninja doesn’t condone violence in the real world, the members wanted to create a video that portrayed the ultimate revenge fantasy to give a voice to victims of cyber bullying. When asked what an internet troll is, guitarist Steve “Stevic” MacKay shares “The difference between a troll and critic is that there is a line internet trolls step over – it’s the line that separates constructive disagreement from vitriolic words with malicious intent.”

Twelve Foot Ninja has gained an enormous following with its refreshing blend of metal with a turn-on-a-dime experimental side, as heard on their most recent full-length Silent Machine. However, in true ninja form, Twelve Foot Ninja made an unexpected song choice for this video with Ain’t That A Bitch. As one of the least heavy tracks on Silent Machine, the song lures the listener into a false sense of calm before the video takes a shocking plot turn.

Silent Machine received its official North American release in October 2013, and crept into the Top 20 of Loud Rock music charts. SiriusXM’s Liquid Metal quickly jumped on board, and their listeners awarded Twelve Foot Ninja the titles Best Artist Discovery of 2013 and Best Song Discovery for the album’s opening track Coming For You. 2013 also saw Twelve Foot Ninja embark on their first ever tour of North America as support to Periphery, Born of Osiris and Dead Letter Circus. “Twelve Foot Ninja are basically one of the best live bands I have ever seen in my life,” proclaimed Periphery’s Misha Mansoor. In addition to the Periphery seal of approval, other notable U.S. endorsers include Mike Portnoy (Dream Theater/Avenged Sevenfold), Dino Cazares (Fear Factory), Chris Broderick (Megadeth) and Wolf Van Halen (Van Halen/Tremonti).

This coming April and May, Twelve Foot Ninja will be making their grand return to the U.S. for a handful of festivals, including Rock On The Range and Carolina Rebellion. The group will also be announcing an Australian tour shortly.