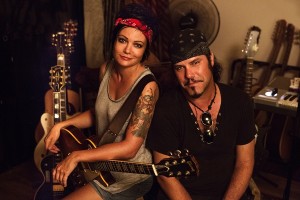 There are certain pairings in the world that just work, Peanut Butter and Jelly, Hall and Oates, Samson and Delilah, Batman and Robin and tonight, I’m hoping that Sarah McLeod and Jeff Martin can be added to that, as on paper this sounds just devine…

Simon Meli is here to kick off the night and for those that have followed him throughout his career knows that this cat can sing. It’s always testament to that when the opener can silence the room from their first song. Armed only with an acoustic guitar he nails song after song of his material from his Widowbirds catalogue as well as a cover of the Bruce Springsteen song ‘My Father’s House’ from Nebraska which was outstanding. Closing out with the Led Zeppelin classic ‘Ramble On’ which this man can sing, obviously as he has spent many a show of ‘Whole Lotta Love’ out front singing these songs, now hearing him do this cements their choice of this killer voice, it was a most excellent start to the evening.

Sarah McLeod comes out firing with ‘Private School Kid’ a solo track of hers usually reserved for a duet with Chris Cheney of The Living End but tonight she belts it out solo and then giving us a ‘torch song’ from her 96% love EP, we get ‘In The Mood’ with her and her absolute powerhouse of a voice as she belts this one out with gusto and makes us feel it. Highly entertaining and engaging as a performer, and with volunteer tambourine player Paula for ‘Scout’s Honour’ was a great track and a whole lot of fun, but now for something completely different with her going acapella for ‘The Greatest Pretender’ and I feel like I’m watching ‘Happy Days’ and it’s all smiles.

A storytelling master, she sets up a new track called ‘You’ll Be the Death of Me’ and takes on the harmonica along with it and belts out this happy little number. Mashing up a couple of tracks ‘Young and Beautiful’ by Lana Del Ray and ‘Team’ by Lorde and sticking her foot in to a few talking in the crowd (thankfully) as come on people, have some respect. Back to the originals with ‘Hurricane’ which is an acoustic version of believe it or not, a dance track she’s done overseas. Whoa, holy cow, this is one hell of a song. Outstanding. Closing her part of the set with ‘He Doesn’t Love You’ which a powerful number this late into the set as she attacks the guitar like it owes her money. Sarah sure can sing and now with Jeff coming out to join her, we are in for a treat.

Instantly the rapport between these two is evident. As they get straight into a radically changed Prince song ‘Thieves in the Temple’ with their vocal stylings blending together to make an amazing cocktail of live music, this is one cocktail you don’t need to set on fire as it lit itself. After some simply amazing banter, and introduction to the pairing we are treated to the tours namesake and current single ‘Man The Lifeboats’ which is not only dark and brooding but powerful and just mesmerizing. Mashing up ‘C’est La Mort’ by The Civil Wars in a beautiful duet mashing in ‘Fix You’ by Coldplay and if you ever said one day I’d hear Jeff Martin sing a Coldplay song I would’ve lost that bet, but simply wow. The delivery was outstanding. But to then play the INXS classic ‘Never Tear Us Apart’ was not only unexpected but I honestly can’t even express to you how good this is. I could leave now, but miss what’s next? No way…

Now it’s time for Jeff Martin to do his thing. In seeing him before on numerous occasions as not only a solo artist but with The Tea Party there’s no stretching the truth when I say that this man is one of the most amazing talents I’ve ever witnessed. After an extended acoustic introduction of ‘Still Water’ with his twelve string acoustic and it’s open tuning giving us that distinctive sound and ‘The Maker’ and it’s lyrical genius, a silenced Basement are marveling in its presence and rightfully so. ‘The Grand Bazaar’ is up to remind us just how good The Tea Party is, and with an announcement of a new Tea Party album in May, the anticipation is huge. Dedicating ‘The Requiem’ to his mother in Canada, you could seriously hear a pin drop in here right now, it’s so respectful at this present time, and I’m completely enticed as he’s just gone into ‘Hurt’ which is simply moving and powerful. What more can I say?

‘I Love You’ is a song that is a beautiful as it is heartbreaking, but the delivery of this song is what makes it stand out, especially flowing into ‘The Messenger’ which of course was nothing less than perfect. ‘A Line in The Sand’ from The Armada is amazing but also overshadowed by the inclusion of a cover of ‘Stairway to Heaven’ and in true Jeff Martin style he puts his flair and energy into it and needless to say, it’s good, as is the Jimi Hendrix song this has just merged into ‘All Along The Watchtower’ and reverting back to Stairway to hit it right out of the park.

Off and back for an encore, with a nice little bit of four bar blues with the assistance of a harmonica and it’s just a groove. It was the perfect way to go out, all twelve minutes of it and I have no words to describe what tonight was, in terms of a live show experience… this is one you need to see and be a part of to understand just how good this was. Plain and simple, I was blown away.