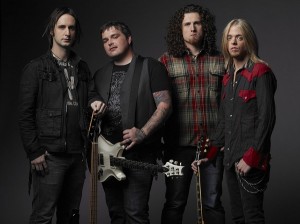 Black Stone Cherry has announced the release of their eagerly awaited new album, Magic Mountain which will be released in Australia on Friday 9 May.

Produced by Joe Barresi (Queens of the Stone Age, Soundgarden), Magic Mountain will be heralded by the first single, Me and Mary Jane.

Black Stone Cherry commented on the making of Magic Mountain stating, “Not since before our first album have we felt the freedom and confidence that we felt while writing and recording this album. After touring the world behind three previous albums that we are extremely proud of, we feel this album best captures the live energy, honesty and vibe that encompasses our true musicianship.”

Magic Mountain sees the band continuing to master their sound which has earned them legions of fans around the world. In the US and UK Black Stone Cherry are certifiable rock icons thanks to relentless touring and a long string of singles, including the top 10 Mainstream Rock smash, In My Blood.  Black Stone Cherry toured alongside the likes of Chickenfoot, Nickelback, Kid Rock, Def Leppard, Alter Bridge, Motörhead and Lynryd Skynyrd. Furthermore, the band has made numerous US and European festival appearances, including a recent headline slot at UK’s Download Festival.