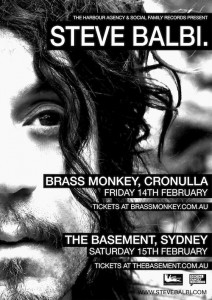 Hot off the back of his national tour support with the Baby Animals, virtuoso musician, songwriter and performer Steve Balbi, will play two up & close and very personal headline shows in Sydney, on Friday February 14th at The Brass Monkey, Cronulla and on Saturday February 15th at iconic Sydney venue, The Basement.

Steve Balbi has walked the line, experience his story is being told in Balbi’s own way – through music.   The former Noiseworks, Electric Hippies and Rose Tattoo bass player and guitarist will be playing a collection of songs from across his career, including those from his recently released first solo album, “Black Rainbow”, an album that reflects on where he’s come from, and where he’s going.

After supporting iconic Aussie rockers Baby Animals on their national capital city tour earlier this year, Balbi has been invited to share the stage with them again on a string of new dates in 2014.   Presented by Social Family Records, The Harbour Agency and MAX, “Feed The Birds Part II” will kick off in Merimbula and continue to Wollongong, Coffs Harbour, Laurieton, Albury, Batemans Bay, Dee Why and Belmont.

Tickets are now on sale for all of Balbi’s upcoming shows via the links listed below.