The Superjesus ready to rock 2014: Band will celebrate Australia Day with a special run of shows in NSW 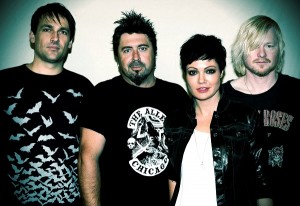 Respected Aussie rock outfit The Superjesus is hitting the road for the Australia Day long weekend, celebrating in fine style with three live shows.  They’ll kick off on 24th January at Waves Wollongong, then head to Bateau Bay Hotel on the 25th, with a massive Australia Day gig on 26th January at Garrison Point, Bankstown.

Following their successful ‘Reformation’ tour earlier this year, which saw the band playing live for the first time in ten years, The Superjesus has been working on new material and are looking forward to road testing it on their fans, with further live dates to come.

The Superjesus rose to prominence in Adelaide in 1994, and was eagerly embraced for their electrifying live shows, spearheaded by charismatic front woman, Sarah McLeod.  They were quick to find support from national broadcaster Triple J and were on their way, enjoying multiplatinum album success with Sumo, Jetage and Rock Music and delivering hit singles such as ‘Gravity’, ‘Secret Agent Man’, ‘Shut My Eyes’ and ‘Down Again’.

The Superjesus live in January 2014: