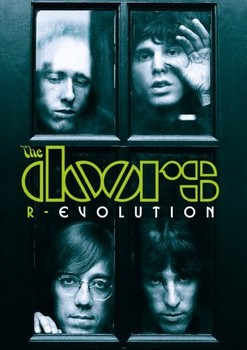 Shock Entertainment is proud to announce the release on November 29, 2013 of R-Evolution from The Doors on DVD and Blu-ray.

Combining early TV appearances with The Doors’ own music films, R-Evolution illustrates how the band evolved from the constraints of mid-sixties television to a point where they had the creative input and power to shape how they were portrayed on screen. From an unknown L.A. band creating early music films to an established worldwide phenomenon executing creative control over their celluloid persona, R-Evolution shows the growth of The Doors from being forced to accept the formulaic television approach to taking control of the medium. It’s all in the title – the evolution of a band that helped revolutionize the way rock bands promote their art.

R-Evolution brings together a wealth of previously unreleased footage of The Doors. This incredible release features the classics “Light My Fire,” “People Are Strange,” “Hello, I Love You,” “Crawling King Snake,” “L.A. Woman,” “Moonlight Drive,” “Break On Through (To The Other Side),” and many more.

R-Evolution boasts a wealth of excellent bonus features, including a commentary by Doors members John Densmore, Robby Krieger and the late Ray Manzarek plus Bruce Botnick and Elektra Records Founder Jac Holzman.  Additionally there is a performance of “Break On Through (To The Other Side)” from the Isle Of Wight Festival 1970, a 45-minute documentary entitled “The Doors – Breaking Through The Lens,” and “Love Thy Customer,” a never-before-seen 1966 Ford training film with music by The Doors. Finally, the DVD has a section of outtakes from the band’s appearance on the US TV show Malibu U in 1967.

In addition to the DVD and Blu-ray, a Deluxe Edition is available on each physical format, packaged in a 40-page DVD sized hardback book with a “scrapbook” style presentation on each track including lyrics, background info, trivia and photos.  All footage has been carefully restored to the highest standards and the sound has been remixed and mastered for 5.1 by Bruce Botnick.

Throughout R-Evolution, the unique charisma and talent of The Doors comes across, whether it be on a lightweight pop show or on a film created from their own imaginations, along with some of the most influential music ever made.

Commentary by Doors members John Densmore, Robby Krieger and Ray Manzarek plus Bruce Botnick and Jac Holzman / “Break On Through (To The Other Side)” – Isle Of Wight Festival 1970 / 45 minute documentary: The Doors – Breaking Through The Lens / “Love Thy Customer” – 1966 Ford training film – music by The Doors / Outtakes: Malibu U 1967.