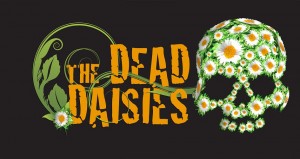 After the enormous success of their first single “Lock ‘N’ Load” feat. Slash which saw the band reach #1 status on Planet Rock Radio, The Dead Daisies are now set to release their second single “It’s Gonna Take Time” on the 23rd of December 2013.

About the song: “It’s a personal view on the world we live in today. We’re all running around on this planet consuming everything in our path. There are so many distractions, that the simple things in life, we don’t seem to have time for anymore? Is it just me? Everyone seems to be in a rush nowadays. This song is about stopping for a minute and identifying what is really important in your life! Simple really, but hard to do in this day and age! I hope whoever hears this song, will leave all their other distractions at the door, turn up the volume and Rock Out!”  – Jon Stevens

Following on from “Lock’N’Load feat. Slash”, The Dead Daisies new single “It’s Gonna Take Time” is an unrestrained and imposing track that showcases Stevens’ faltering wail against relentless and crunching guitar riffs.  With a thumping cadence that contributes to the rhythm as much as the melody, “It’s Gonna Take Time” features a raw and unforgettable sound seemingly plucked directly from the Golden Era of 1970’s classic rock.

The 12-track self-titled debut album featured first single “Lock ‘N’ Load” feat. Slash (released in the UK on 28th Oct 2013). The song was co-written with Slash and showcases the inimitable guitar tone of the legendary guitarist.

The album picks up where the single leaves off. From the opener and forthcoming second single “It’s Gonna Take Time,” to the uplifting “Writing On the Wall”, the dirty groove of “Tomorrow”, and the soulful ballad “Yesterday”, ‘The Dead Daisies’ is a rock album infused with big choruses, strong hooks, powerful melodies and groove with a sound influenced by classic late ‘70s rock, early ‘80s hard rock in a soulful ‘Bad Company’ meets ‘Foreigner’ via ‘The Faces’ kind of vibe.

The Dead Daisies as Special Guests of Black Star Riders are playing the dates below (unless otherwise stated):

Tickets for the Underworld headline show are priced £7.50 (subject to booking fee). Doors £18.30 and support from Leogun and The Graveltones