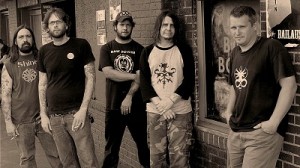 Hailing from the dark lands of the deep South, better known as New Orleans, North America’s most uncompromising band EYEHATEGOD came to be In the year 1988, and have since created a 25 year legacy of sheer unadulterated, no holds bared, musical brutality.

Their vision was pure and their approach was hostile, through the course of their four studio albums, a 5th has been recorded and is yet to be released, EHG have made an unquestionable mark on heavy music the World over, between influencing countless bands and helping create the musical sub genre of heavy music called sludge metal, EHG are a force to be reckoned with, and they’re still touring harder than ever, playing more intensely than most bands half their age.

With founding members Jimmy Bower (Guitar) and Mike Williams (Vocals), together with long time serving members Brian Patton (Guitars) and Gary Mader (Bass), Eyehategod now welcome their newest member Aaron Hill (Drums) to the EHG family, after the recent passing of the late Joey LaCaze, who was in the band since their inception way back when.

In celebration of their 25th Anniversary EYEHATEGOD will be returning to Australian shores this January to show us all what we don’t know how.